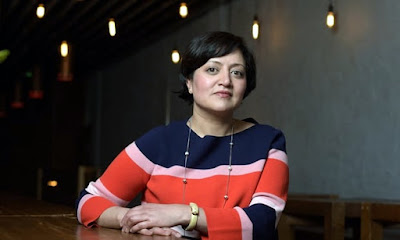 Rokhsana Fiaz is challenging Sir Robin Wales, the mayor of the London borough since 2002


"A referendum should be held on scrapping the directly elected mayoral system used in the London borough where the Olympics was held, according the woman challenging the capital’s longest-serving council leader for the top job.
Rokhsana Fiaz accused Sir Robin Wales, the mayor of Labour-dominated Newham, of presiding over an administration that makes decisions in a restricted circle and excludes community participation in formal council meetings that in some cases have lasted less than 20 minutes.
Two thousand Labour members in Newham have until Friday to vote on the party’s mayoral candidate for an election in May. Wales has been the mayor since 2002 and was the council leader from 1995 in a borough where Labour has 59 out of 60 council seats.

Guardian Today: the headlines, the analysis, the debate - sent direct to you

Read more
Fiaz said she would ask residents to vote on whether they wanted to continue with the mayoral system by the end of her first term. “This council is too top-down, too hierarchical. The incumbent to my mind represents the past, a very ossified way of doing things,” she said.
The system of directly elected mayors was created under Tony Blair. It was successfully established first in the capital and more recently in Manchester and the West Midlands, but it has not caught on elsewhere. Newham is one of four London boroughs that use the system. At the last election, in 2014, Wales won with 61% of the vote.
He has a strong grip on Labour’s East Ham constituency and is backed by the area’s MP, Stephen Timms, and he has compared himself to Sir Alex Ferguson. Under Wales’s leadership there has been significant economic investment in the area around the Olympic park, underpinned by the Westfield shopping centre.
He has argued that “things take time to get done”, but Fiaz claimed the regeneration benefits have been uneven, with 24,000 people on the council house waiting list at a time when some newbuild flats near Stratford railway station are on sale for more than £1m. “We have all this development, but residents can’t afford to live in Newham,” she said, addingthat she herself could not easily afford to buy a home in the borough.
She also criticised the council for writing off £52m on a loan intended to develop the Olympic Stadium for use by West Ham United, a deal that soured when hoped-for income was not generated.
Fiaz has been a councillor since 2014. She previously worked as a television producer in public relations and latterly as an adviser on race before running an interfaith charity, the Maimonides Foundation.
She has won support from Momentum, although the grassroots Labour group is not strong in the area, and she has the backing of the West Ham MP, Lyn Brown. Fiaz said she voted for Jeremy Corbyn in both Labour leadership contests, but described herself as “a candidate for everyone, hoping for support from all parts of the party.”
Posted by John Gray at Monday, March 12, 2018