While in Dancing Dick's Lane - White Notley to Witham walk 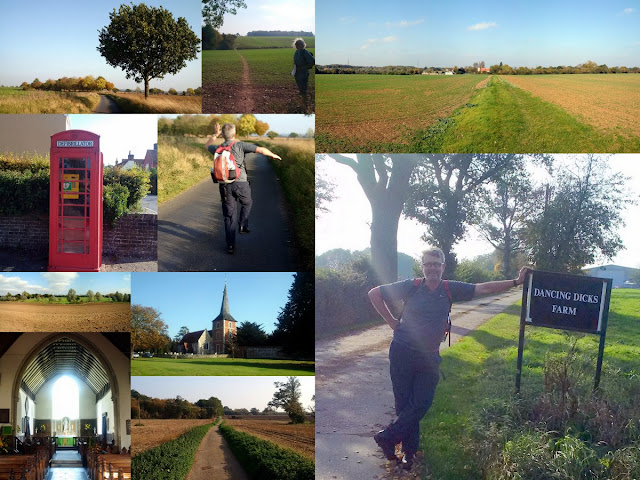 Definitely off message but today Gill and I went for a linear walk from White Notley station to Witham station (Essex). It was a walk in an old booklet I found on my shelf called "Off the Beaten Track - 20 Rambles in Rural Essex" by Great Eastern Railway.

We had a a bit of a mad panic to get to the station to catch the train to White Notley since the ticket machine at Forest Gate station is currently out of action (should have used the new ones at Wanstead Park).

The walk was fantastic. Really pretty countryside and chocolate box villages. Very quiet and peaceful. We passed no other ramblers even though much of the route followed part of the long distance footpath, the Essex Walk. Apart from a couple of friendly dog owners we saw no-one.

The weather helped, since it was warm and blue skies (I was comfortable wearing only a tee-shirt on 15 October!).

It was interesting to see that an old Post Office red telephone box had been turned into a village base for an emergency Defibrillator in case anyone has a heart attack nearby (my father died while on a walking expedition and I have often wondered if he could have been saved if a defibrillator had been accessible. He had stopped off at a town for breakfast when he had the attack).

The 14th century church in Terling was lovely to visit. An ancient church with brass rubbings of long died medieval knights but still a valued community and religious centre currently celebrating the harvest festival. Well worth a visit if open.

The final part of the walk into Witham was along the oddly named "Dancing Dicks Lane" which went past "Dancing Dicks Cottages" and "Dancing Dicks Farm". I have googled this and found no explanation whatsoever for these names. I did feel obliged to participate and dance even though my name is not Richard (see above picture in collage).

Stopped off at Witham for a much needed drink with our nephew Lewis and his partner, Felicity, and our great niece the gorgeous Teagan! 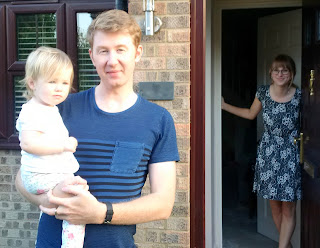 A fab walk. The booklet said 8 miles (the instructions were not very good but may be just out of date. Make sure you have a Ordnance survey map/route planner with you) but Sportrate on my BlackBerry recorded 11.9 miles (and it took 4 hours 40 which is accurate including stops).

Good evening sir. Dancing dicks farm is where I was born in the mid sixties. It was probably so named because of a farm labourer who worked there in the 1800s. Aparrantly he was known for playing musical instruments and dancing whilst doing so at social gatherings etc. I e. Harvest home(festival)
Dancing dicks was also known in my grand fathers day as red barns farm.
Where there is now a large building for storing cereal crops, there used to be a cow milking parlour, fed shed, Dutch barn and a water tower.
I have many happy memories of living there with my mum and dad and my older brother.

Thank you for sharing this. I did wonder why? It is certainly a lovely place.