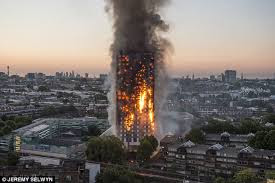 This evening I took part as a Newham Councillor in a "Fire Safety in Tower Blocks Scrutiny Commission" meeting. It was actually a mostly positive and constructive meeting but for some bizarre reason was held in secret and I cannot report on it.

I will be taking this up with the Newham CEO.

However, I thought this recent "promotion" in Inside Housing regarding retro installation of Sprinklers is interesting even though this was paid for by suppliers of such systems.

I am so far a fan of retrofitting of blocks with sprinklers but let's see what happens during the Scrutiny.

"Following the tragic Grenfell fire, there have been numerous questions surrounding the retrospective installation of sprinkler systems to tower blocks. Should sprinklers be installed to all tower blocks? Are they cost effective?

Carol Burton, Senior Project Manager at Basildon Borough Council would certainly agree. Following a number of arson related incidents, the Council worked closely with Essex County Fire and Rescue Service to agree the most appropriate way forward to minimise the spread of fire to its dwellings.

In January 2016, following a competitive tender process, Basildon Borough Council installed sprinkler systems across the 84 flats at Brooke House – a Grade II Listed tower block in the centre of Basildon. Works were completed within 26 weeks, with a resident satisfaction rate of 100%.

Various options regarding the type of suppression system were investigated to identify the most effective for the type of fires that had occurred within and around Council premises, and provide the best value for money. The system installed was considered the most appropriate for the size of building, the cost of creating and installing water tank storage, the water pressure in the area, available technology at the time, and the fact that at the time of original design there was still no published British Standard for water mist systems – only a draft document.

Since their installation there have been no false activations or complaints regarding water damage – both common concerns regarding sprinkler systems. Basildon Borough Council now also plan to install sprinklers at the Felmores Estate, with work beginning by early 2018.
The main challenges faced by the Council were dispelling the common myths regarding sprinkler systems to gain resident support. Through joint resident meetings with Essex County Fire and Rescue, the Council were able to dispel a number of myths, including:

MYTH: The sprinklers will be activated by smoke and cause unnecessary water damage.

FACT: Sprinklers are not activated by smoke, but by a predetermined temperature, usually around 73 degrees. The chances of sprinklers malfunctioning are 1 in 16 million; the odds of winning the lottery are greater!

MYTH: When a fire is detected, every sprinkler in the building will activate.

FACT: As sprinklers are triggered by high temperatures, they will only be activated in the areas affected by fire.

MYTH: Sprinklers will ruin the appearance of my home.

FACT: Concealed sprinklers are fitted within the ceiling and covered by a flat plate. Most people don’t notice them, as shown in the images below.

MYTH: Sprinklers will be activated by vandals and cause water damage to properties.

FACT: As modern sprinkler systems are concealed within the ceiling, they are very difficult to vandalise. As it was quoted by a fire officer ‘if a vandal sets off a sprinkler they will only do it once, you get very wet!’

MYTH: Sprinklers are too expensive to install retrospectively.

FACT: The average cost of installing sprinklers is around £2,500 per property. Sprinklers can reduce damage to property by up to 90% and reduce physical injuries by at least 80%. Insurance premiums have been known to go down where sprinklers have been installed.

MYTH: Sprinklers use too much water.

FACT: As well as causing less water damage than a fire hose, sprinklers also use less water. Typically a sprinkler head discharges 55 litres per minute. A firefighting hose discharges over 600 litres per minute.
Another local authority to benefit first hand from the installation of sprinkler systems is Sheffield City Council. They worked in partnership with ########### to retrospectively install sprinkler systems to 23 blocks.
Sheffield City Council commissioned a fire safety report which identified a number of ranch style properties posing a serious fire risk. The Council worked with BAFSA to conduct an extensive cost analysis, weighing up the cost of passive fire safety work and fire suppression systems. As these ranch style properties had a complex layout with various inner rooms, the Council opted for the installation of sprinkler systems.

Sprinkler systems were successfully installed across 540 individual dwellings within 11 months, 9 months ahead of schedule. The project cost a total of just over £1,500 per property.

The system installed by ########### successfully contained a serious fire on the 9th January 2016. The fire began from a mobility scooter parked outside a top floor property. The sprinkler system contained the fire until firefighters arrived on site, and allowed the elderly resident to escape safely.

Sprinkler systems are extremely effective at extinguishing and reducing the impact of fire, however they must be used in conjunction with other fire safety measures such as fire compartmentation, and the use of fire alarms or smoke detectors as an early warning of fire for residents".
Posted by John Gray at Tuesday, October 17, 2017