Hope for our Country - Campaigning in Chingford & Woodford Green 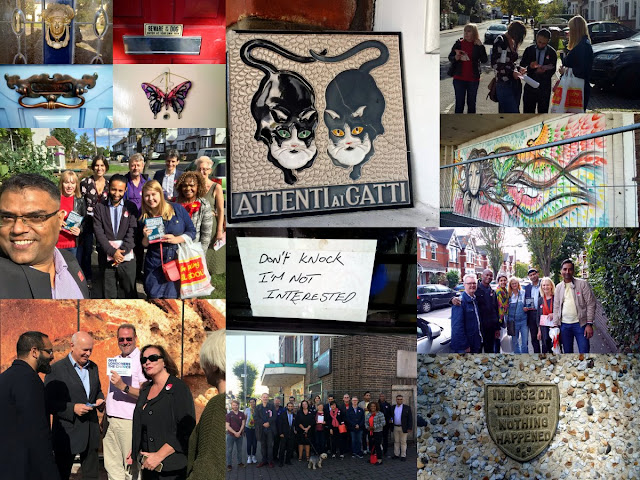 Yesterday, I was out canvassing next door to Newham, in Chingford & Woodford Green with a strong team from West Ham Labour, led by our MP, Lyn Brown. Following the General Election many people now think that this traditional Conservative seat is a marginal and winnable for Labour.

The fact that the sitting MP is the former Tory leader, Iain Duncan Smith, adds to the attraction for many to support local activists, who will be trying to unseat him at the next election.

Saturday was also a Labour Party national campaigning day and the theme was "Hope for our Country".

There was a bit of confusion at the beginning about where was the meeting point but after the traditional photo we split up into several canvass teams.

My team went up one side of a very, very long road then back again. It was made up of mostly houses which were relatively easy to canvass but with some flats above shops which are more difficult to get into and contact anyone.  It was great to have an experienced and competent team leader "running the board" (telling us where to go and to collate our information).

While waiting for someone to answer (or not) the door, after you have knocked, can be very boring, I decided to continue to photo with my phone interesting front door "furniture".

It was a very positive canvass for Labour. It did not feel like a safe Conservative seat either. There was clearly people who were against Labour but they were (bar one) polite and reasonable.

I met one mother with toddlers running around her home, who was so, so angry with inadequate resources for education. She demanded that I feed back her concerns. She told me that her employer has loads of job applications from qualified teachers who want to leave education.

The most interesting conversation was with someone who described herself as a life long Tory who now thinks that this government is just cruel and uncaring to the needy. She is thinking hard about voting Labour next time but said it was very difficult to change your lifelong beliefs.

I asked one man if he was voting Labour and he said "Of course, my Mum would kill me otherwise".

I was not in the canvass team with Lyn Brown MP, which met up with a street stall being run by Iain Duncan Smith (bottom left of photo) but that must have been fun!
Posted by John Gray at Sunday, October 01, 2017