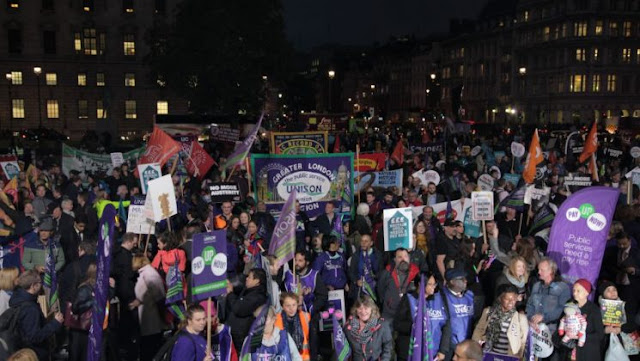 NEC report 18.10.17
"People are getting angry, seeing how much they have lost through seven years of the pay cap, UNISON’s national executive council heard at its meeting in London today.
And that is because of the campaign being run by the union, general secretary Dave Prentis told the meeting.
And he reminded the NEC that the Pay Up Now! campaign has two parts.
These include a political campaign, including rallies and demonstrations around the company and pressure on MPs, culminating in the joint union lobby of parliament the day before, with a rally – which Mr Prentis addressed – in the evening.
And then there is a an industrial campaign.
“It’s a serious campaign and it’s working,” the general secretary said. “We are getting our members more and more to put their heads above the parapet. We are seeking to break a pay policy.”
And that, he said, “is an exercise in power. We’ve got to build up pressure and convince members that it is as important to get a pay rise as it is to keep jobs.”
Mr Prentis also used his general secretary’s report to remind the NEC of a number of recent wins in local disputes, as well as ones taking place.
These included the 20-month Glasgow janitors dispute which won a 6% pay rise for the affected members, and a victory in Salford which saw an 11% increase for social care workers.
And just days before the NEC meeting, teaching assistant members in Durham voted to accept an offer from employers – voting Yes by 62% on 57% turn-out – to end a long running dispute.
As part of its normal procedure of remembering colleagues who have passed away, the NEC opened with a tribute to former general secretary Rodney Bickerstaffe, who died at the beginning of the month.
Dave Prentis paid tribute to “a giant of our movement” and “a close personal friend” who was involved in “the trade union movement and our union, for so many years”.
He regarded his two biggest achievements as winning a statutory minimum wage , which “helped many millions of low paid, mainly women, workers” and the creation of UNISON in 1993.
The NEC also sent condolences to the family of former national secretary Mike Jeram, who died in the summer, and honoured other former staff members and activists, who died recently.
The meeting also:
Posted by John Gray at Friday, October 20, 2017