Speech on Rohingya and the Myanmar Government by Lyn Brown MP 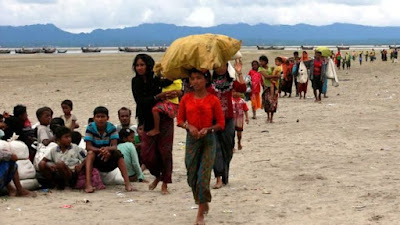 On 17 October Lyn made the following speech in a Parliamentary debate on the persecution of the Rohingya by the Myanmar government:
"As we have heard today, the evidence about what has been happening in Myanmar is clear: there is a concerted campaign of ethnic cleansing against the Rohingya. The military have used every kind of evil to create fear and trauma—men, women, and children tortured and killed; their families and neighbours forced to watch; children and elderly people burnt alive in their homes; gang rapes by soldiers, including of girls as young as five. All of these horrors are used as weapons to threaten and intimidate more than half a million innocent people into fleeing their homes, far too terrified to return. And who can blame them?
Hasina Begum lived in the Rakhine province, where the violence has been most intense, and her testimony is harrowing. She described how, first, the soldiers killed the men they found, cutting their bodies into four parts to make future identification difficult. Then they rounded up women and girls of the village, and forced them to watch as two teenage girls were raped by 14 of the soldiers. Hasina was forced to watch; she relives this horror in her nightmares.
These obscenities have clearly impacted on my community in West Ham. Last week I was given a petition signed by more than 750 constituents, and I have had many emails about this debate. They want the Government to get to the root of this crisis, not just condemn the most obvious abuses. I was deeply moved by their compassion, and I share their anger. Enough has not been done.
Aung San Suu Kyi has failed to live up to her responsibility as the head of Myanmar’s Government. I thought she was a great woman, but great women do not allow ethnic cleansing to take place in a country in which they have power, great women do not seek to deny facts when innocents are being slaughtered, and great women do not remain silent. The actions of the military, and her own inactions, have trampled the reputation of Aung San Suu Kyi. The generals must be loving it.
But let us be clear: the greatest responsibility for what has happened belongs to the military, and especially the head of the army, Min Aung Hlaing. I want every one of those responsible for these crimes against humanity to face justice, and I want to see Min Aung Hlaing and the other senior commanders on trial for their crimes. The only way for this to happen is if our Government are resolute in calling out these crimes, supporting strong and co-ordinated sanctions. I want to see a visa ban on military figures, a complete ban on all equipment sales to the military and a ban on investment in and business with military-controlled companies. These actions need to be taken at the widest possible level across the EU and across the wider world through diplomacy at the UN.
The immediate humanitarian crisis remains appalling, and I am not convinced that the funding that the Department for International Development has committed is adequate, given the enormous scale of the crisis. We are currently providing emergency funding for shelter for approximately 26,000 people, but that covers less than 5% of the refugees who have fled since August. I understand that we have been the largest single donor in this crisis, and I certainly welcome that, but given the enormity of the circumstances it is simply unacceptable that many people are still not secure and that their basic needs are not being met. There can be little doubt that more can be done, and I want the Government to commit to doing it today."
In September, Lyn also joined 157 other Members of Parliament in writing a letter to the Foreign Secretary, urging the Government to exert more pressure on the Myanmar government. A copy of this letter can be viewed here.
Posted by John Gray at Friday, October 27, 2017