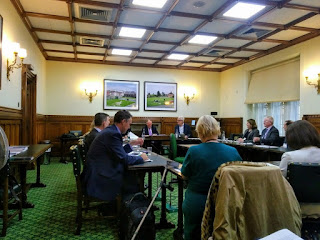 Last week I attended an evening meeting of the All Party Parliamentary Group on Local Authority Pension Funds chaired by Clive Betts MP.

Before the meeting started I had a robust but interesting exchange with a policy expert on Local Authority Housing companies. I am really worried about such investments but promised to read his paper and then meet.

At the meeting itself the guest speaker was National Infrastructure Commissioner, Julia Prescott, who gave an upbeat presentation on the many opportunities offered to LGPS pension funds by infrastructure investments. I am generally a fan of pension funds investing in in long term infrastructure projects but in the Q&A that followed, I was reminded of some of the challenges, in particular, those facing local government pension investments in this asset class.

In response to a question, Julia gave the example of funds investing in a future Silvertown tunnel in East London in a positive light when obviously she was not aware of the huge political opposition to a such a tunnel locally and the environmental risks and reputational damage that any investor in a tunnel would face, especially if a local authority pension fund.

I had to leave early for another meeting so I did not have the chance to ask a question but I suspect that the new London wide Council Pension Collective Investment Vehicle (CIV) would face enormous problems investing in such a project that many think would result in the carbon monoxide gassing of children.