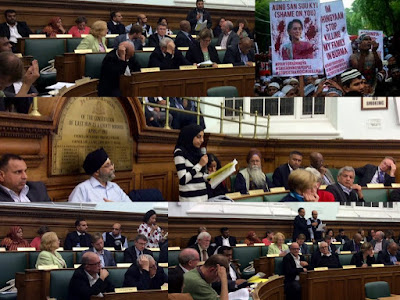 As reported here I was really pleased at this debate and the unanimous decision of full council to support.


"MOTION REGARDING THE CURRENT SITUATION IN MYANMAR

- having regard to the Report of the United Nations High Commissioner for Human Rights: Situation of human rights of Rohingya Muslims and other minorities in Myanmar, 29 June 2016

• - having regard to the Universal Declaration of Human Rights of 1948,

• - having regard to the International Covenant on Civil and Political Rights of 1966,

• - having regard to the International Covenant on Economic, Social and Cultural Rights of 1966,

- having regard to the 1951 UN Convention on the Status of Refugees and the 1967 Protocol thereto,

Having taken note of,

- The serious human rights abuse and violence against Rohingya communities and refugees by the Burmese military.

- The fact that the Rohingya continue to suffer from persecution, arbitrary detention, torture, forced displacement, abuse, and severe legal, economic, social and religious discrimination in Burma/Myanmar

- The arbitrary deprivation of their citizenship

- That over 150,000 Rohingyas remain in more than 80 internal displacement camps in Rakhine State, with limited access to humanitarian aid, while more than 100,000 others have fled by sea or land, often at the hands of human traffickers, to other countries over the past years; whereas many Rohingya refugees lost their lives in sinking boats or by being pushed back into the sea; whereas several thousands of Rohingyas are reportedly trapped in crowded wooden boats in inhuman conditions and urgent need of assistance in the region;

- That over one million Rohingyas live as refugees or migrants outside Burma/Myanmar; whereas Bangladesh, India, Malaysia, Pakistan, Saudi Arabia and Thailand are the countries to which the largest numbers of Rohingyas have fled; whereas many of them are not recognised and protected as refugees, live and work illegally with no documentation, and are victims of violence, exploitation, exclusion, marginalisation, and extreme poverty;

Calls upon the British government to,

1. Condemn in the strongest possible terms the recent attacks on the Rohingya by the Burmese military and the killing and forced displacement of thousands.

2. Reiterate its deepest concern about the plight of the Rohingya and call for regional and international mobilisation to provide them urgent assistance;

3. To expresses its deep concern about the continued anti-Muslim rhetoric and violence in Rakhine State and in other parts of Burma/Myanmar;

4. Call upon the government of Burma/Myanmar to put an immediate end to all forms of violence, persecution, arbitrary detention, torture, forced displacement, abuse and discrimination against the Rohingya;
Posted by John Gray at Wednesday, September 20, 2017