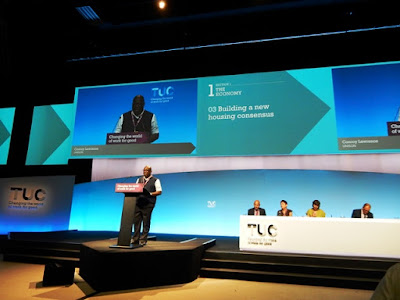 Congress. I work at Lewisham Hospital in London.

Like all of you, I see members struggling with impossible choices at the end of the month before pay day.

And at the root of those choices is often the cost of their housing. Crippling costs that drive choices where to work and live. Often far away from their communities and families.

Whether to start a family or not and other major life choices are often sadly influenced by the cost of housing.

Congress, for far too long, housing has been the political dog that did not bark. The general election this year changed the public debate in this country and showed that finally 38 years after the Tories began dismantling public housing - and denying millions of people their basic human right to a home – the tide of public opinion is turning.

Today there are one and a half million fewer homes available for a rent, that people on low incomes can afford. Less than there were 38 years ago - and the population has grown dramatically since.

As a Londoner I can see that is why families with children, the elderly and disabled end up being housed on the 18th floor of a tower block.

The scandal that surrounds the Grenfell House tragedy lies not just in the repeated failure of government to listen to and act on the advice they received but in the Conservative political mantra that regulation is ‘bad’.

The Tories 38 year strategy of dismantling public housing has been the biggest privatisation in this country’s history. The Right to Buy was misnamed from the start – it was a Right to a Discount – and 38 years on, we find that huge numbers of the homes that have been sold are now owned by private landlords, in one case the son of the Tory Minister that introduced the Right to Buy, and often in companies registered in tax havens.

And the Tories knew that caps to the local housing allowance would drive low income households out of central London – this is social cleansing – and if the Tories have their way, it is what will happen in Manchester, Birmingham, Leeds and Newcastle too

On London we surveyed our members on housing cost.

And I should say first that these statistics probably hold true in many parts of the country, whether city or countryside. I know from my UNISON colleagues that one of the biggest mismatches between local wages and house prices is in the south west of England.

In London over 1000 public service workers told us this:

63% said housing costs means they are looking to move home or job.

87% of health workers in the private rented sector said they were looking for somewhere new to live and work.

24% said they were struggling to manage.

This rose 65% struggling if they were tenants of a housing association.

Two thirds of all responders said they were spending over a third of their income on housing in London.

Congress, wherever you are from, we need our local workers have the chance to live near where they work and living in the communities they serve.

Congress, this motion provides the basis for the TUC to play its role in ending the dismantling of public housing and beginning a new era of providing quality, safe council and housing association homes with good space standards at rents people can actually afford.

Please support the right to a roof over our heads in the 21st century. Support the motion.
Posted by John Gray at Monday, September 11, 2017