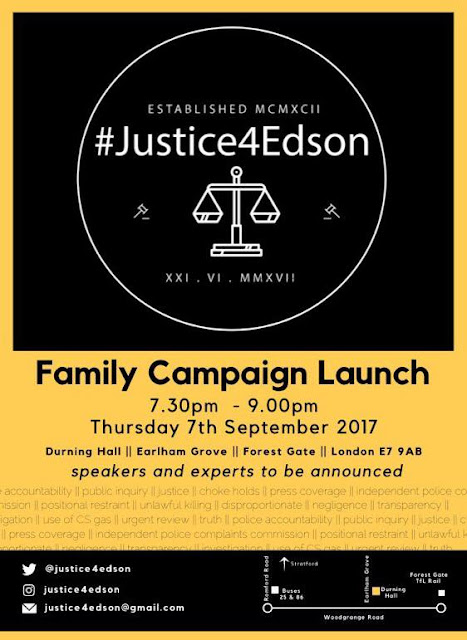 Plus an account of what happened from ... Observer. Let's see what comes out at an inquest and other investigations underway.

'It was one of Da Costa’s preferred starts to a night out – stewed chicken and rice in Calabash, the popular Caribbean restaurant near Stratford Broadway in east London. Plus he had found a new song – D-Block Europe’s Traphouse – and when the 25-year-old had a fresh tune he was even more uproarious than usual.

“He was rapping, joking that we’ve got to get to the studio. I was going crazy with the Traphouse, telling him the next time I’m not okaying that song in the car,” said his friend Jussara Gomes, 23.

Just after 10pm on 15 June they were heading east on Tollgate Road in Beckton when the Mercedes A-class driven by Gomes was pulled over by officers driving an unmarked police car outside the Woodcocks estate. Plainclothes officers asked Da Costa to leave the car.

Gomes could hear them chatting for several minutes before sensing what she described as the “atmosphere” abruptly changing. Leaving the car she found Da Costa, who was wearing a blue Ralph Lauren tracksuit, lying on the ground. She said: “Edson was already on the floor, five steps from the car, face down. Two of them are already holding him down. Edson was moving but not kicking out or anything.“

Gomes said it looked like Da Costa had something in his mouth. “He’s not releasing whatever he has in his mouth so [an officer] pepper sprays him from really close.” said Gomes, raising her index fingers two inches apart to show how far she thought the CS gas was sprayed from his face.

“At this point I’m going: ‘Why are you guys still pepper spraying him if he’s already on the floor? His face was on the floor because I saw scratches after.”

Gomes said that after Da Costa was sprayed, he stopped moving. “I was asking: ‘Why is he not moving? He’s not reacting, not moving.’ This is all I’ve said for five minutes. All of a sudden, foam started coming out of his mouth. That’s when they stopped holding him down.”

By now, other people from the estate had come to see what the pandemonium was about. One of the first on the scene was David O’Brien, who lives 10 yards from where Da Costa was being held. “My son had called to say there’s an incident happening outside and I went out to see three officers – two were on top of him, one was trying to get people away.”

David O’Brien, who witnessed the incident that preceded Edson da Costa’s death, at the place where it happened. Photograph: Antonio Olmos for the Observer
O’Brien said when he arrived at the scene, Da Costa seemed wholly passive. “There was no need for them to be on him, he wasn’t struggling, he wasn’t resisting arrest whatsoever.

“But he must have had difficulty breathing with the two officers on him, their weight crushing down on his chest and his face on the floor.”

O’Brien estimated that the officers might have been on top of Da Costa for up to 10 minutes. He said Da Costa then appeared to stop moving and for five or six minutes seemed “lifeless”.

The witness said Da Costa’s condition seemed to deteriorate. “He wasn’t breathing. I was saying, ‘Call an ambulance.’ He had stopped breathing. Then they rolled him over and started trying to resuscitate him.” O’Brien believes it was too late. “They tried to resuscitate him for 10 minutes, but he was already dead. His chest wasn’t moving, he had stopped breathing. His chest was flat. He was totally lifeless. I watched him die in front of me. He died on the street, definitely. Everyone will tell you that.”

Student midwife Samiya, who lives next door to O’Brien, went outside after hearing a commotion. “I heard screams of: ‘Get off him, get off him, he’s not breathing.’ It was hysterical.”

Samiya, who managed to get extremely close, said that from her experience, it looked like Da Costa was dead. “His skin was grey, it had lost all its colour. He looked nothing like he does in his pictures.

“When I turned up they were giving [him] CPR [cardiopulmonary resuscitation], but he looked lifeless, like he was gone. They were giving CPR but he wasn’t responding.”

She saw paramedics still administering CPR to Da Costa in the ambulance.

Another neighbour, Lee Hulme, recalled hearing frenzied shouting outside between 10pm and 10.30pm. “A man was shouting: ‘You’re killing him, you’re killing him.’ That must been over the space of 10 to 15 minutes.”

Several witnesses also told the Observer how they were both mystified and repulsed that Da Costa had been undressed. “I couldn’t understand why he was butt naked. They had taken all his clothes off, socks, trainers, everything. There wasn’t a scrap of clothing on him,” said Samiya.

O’Brien added: “They took all his clothes, he was totally naked. They took away his dignity. Why would you take off a man’s trousers in front of all those people?” Hulme, who lives 30 yards from where Da Costa was arrested, said: “He was stark naked on the floor, naked and lifeless.”

Da Costa was taken to Newham general hospital but never recovered from his injuries. On 21 June, six days after being admitted to hospital, the father-of-one’s life support was turned off. He died in the presence of 70 family members and friends. On Friday, scores congregated for his funeral at Manor Park cemetery, three miles north of the street where some believe Da Costa, who hoped to set up a car refurbishing company, had actually died before being taken to hospital.'
Posted by John Gray at Tuesday, September 05, 2017