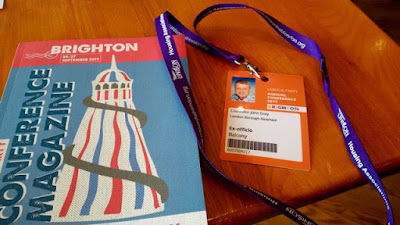 I arrived last night in Brighton for conference and started badly by managing to leave my suitcase on the train. By the time I realised and ran back to the station (apologies for ignoring colleagues on the way) the train was on its way back to Bedford.  My conference credentials as a Labour Councillor had also not arrived in time so I had to queue at the conference office to get a replacement.
This all meant I was late for the London Party reception and arrived in scruffy jeans and tee-shirt also missed the speeches by Mayor Sadiq Khan and Shadow Chancellor John McDonnell MP.

It was good to see Sadiq and other Labour Councillors, MPs and activists at the reception and catch up on the serious political issues of the day (aka gossip and rumour mongering).

Afterwards we went for a meal and later drinks with fellow Newham activists.

As usual I will try and post on conference fringes and speeches as and when.
Posted by John Gray at Sunday, September 24, 2017