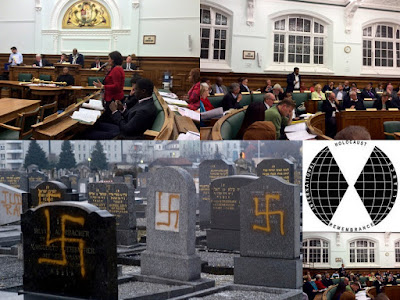 I was really pleased that this (amended) motion was passed at the Newham Council meeting on Monday. I spoke in favour as did (pictures) Cllr Rokhsana Fiaz OBE, Cllr Neil Wilson, Cllr Anamul Islam, Cllr Clive Furness & the Mayor Robin Wales.

There also was an excellent motion on the slaughter in  Rohingya & other minorities in Myanmar which I will post. Also passed unanimously.

This Council therefore welcomes the UK Government’s announcement on December 11th 2016 that it will adopt the International Holocaust Remembrance Alliance (IHRA) working definition of antisemitism, making Britain one of the first countries in the world to adopt it. This definition has also been adopted by the Labour Party and featured in the Labour Party’s Race and Faith Manifesto (page 12) published during the 2017 General Election. The IHRA definition defines antisemitism as thus:

This Council notes that:

Antisemitism is a certain perception of Jews, which may be expressed as hatred toward Jews. Rhetorical and physical manifestations of antisemitism are directed toward Jewish or non-Jewish individuals and/or their property, toward Jewish community institutions and religious facilities.

Manifestations might include the targeting of the state of Israel. However, criticism of Israel similar to that levelled against any other country cannot be regarded as antisemitic.

Antisemitism frequently charges Jews with conspiring to harm humanity, and it is often used to blame Jews for “why things go wrong.” It is expressed in speech, writing, visual forms and action, and employs sinister stereotypes and negative character traits.

Antisemitic acts are criminal when they are so defined by law (for example, denial of the Holocaust or distribution of antisemitic materials in some countries). Criminal acts are antisemitic when the targets of attacks, whether they are people or property – such as buildings, schools, places of worship and cemeteries – are selected because they are, or are perceived to be, Jewish or linked to Jews.

Antisemitic discrimination is the denial to Jews of opportunities or services available to others and is illegal in many countries.

This Council welcomes support within the Council for combating antisemitism in all its manifestations.

This Council hereby resolves to adopt the above definition of antisemitism as set out by the International Holocaust Remembrance Alliance and pledges to combat this pernicious form of racism through awareness raising and education; and through engagement with the range of Jewish opinion on how best to address antisemitism in addition with all communities that live in Newham.

This Council also condemns all forms of racism, Islamophobia, homophobia, transphobia and sexism and we commit to fighting against them".