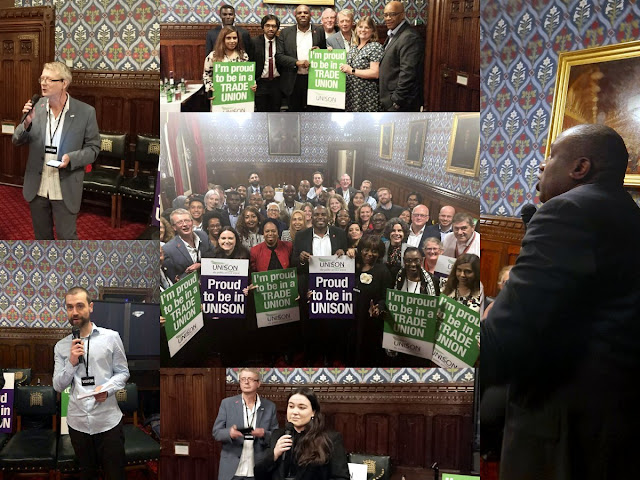 Picture collage from last weeks reception in the Jubilee Room in Westminster Hall. Many, many thanks to Shadow Foreign Secretary David Lammy MP and his staff for hosting this event and for David giving a passionate speech and Parliamentary report to UNISON members present, who are elected Councillors from all over London.

As Chair of Greater UNISON Labour Link Committee (and on behalf of our wonderful Vice Chair, Yvonne Green) , I welcomed and introduced speakers. After David gave his keynote speech, our new(ish) UNISON Regional Secretary, Jo Galloway, gave a cracking overview of politics and the union in London. Especially all the campaigns that should unite us, about tackling low pay, health and safety and training.

Next was our also new(ish),  Political Secretary and UNISON Regional officer, Joel Bodmer. He laid out specific asks of Councillors regarding adopting our UNISON Ethical Care charter and Residential Care charter.

UNISON National officer, Gavin Edwards, also spoke about our Social Care campaigns and what Councillors can do to support some of the most vulnerable workers in Local Government.

Afterwards  there was a chance to take some photos and have a chat and gossip in the finest traditions of UNISON and Local Government.

Due to Data Protection issues we cannot match UNISON members against Labour Party membership lists, so apologies that the invite to this event was a bit hit and miss. This will be the first of many events and all invitees will also be contacted with dates of campaign sessions to support UNISON nominated Prospective Parliamentary Candidates.