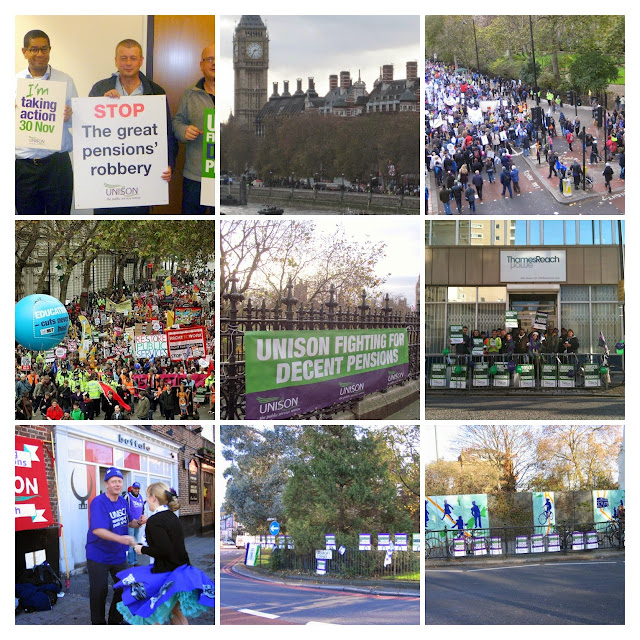 Facebook reminded me this morning that it is the 11th anniversary of the 2011 successful strike action to protect public sector pensions (Facebook immediately lost any thanks for this memory for refusing to allow me to share, since they thought my post of that day was "spam" but nevermind).

This was a really important day and without a shadow of doubt, this successful, well organised and well supported action forced the government to back down and has protected pensions rights ever since. In fact, in a recent pension training I attended, we were told that 99% of local government staff had actually benefited from the changes to the scheme brought about after the strike action.  Not only that but currently the vast majority of Council pensions funds are now more or less, fully funded. No financial deficits. A significant improvement since 2011.

Remember that the government wanted to get rid of traditional (defined benefit) public sector schemes on the grounds that they were somehow "unaffordable". I feel so sorry for workers in private sector defined benefit schemes, who were effectively "cheated" out of a decent pension and given this same excuse.

The day itself started early with branch picket lines in East London (with some jiving to pass the time and keep warm) followed by a TUC lead march through central London followed by a rally. https://www.johnslabourblog.org/2011/11/unison-housing-association-pension.html

I was really pleased to hear today that UNISON Health workers have voted to go on strike https://www.unison.org.uk/news/2022/11/boost-nhs-pay-to-prevent-pre-christmas-strikes/ after another well organised and thoughtful campaign. I wish them solidarity (and good luck!). I will be joining them on the picket line.