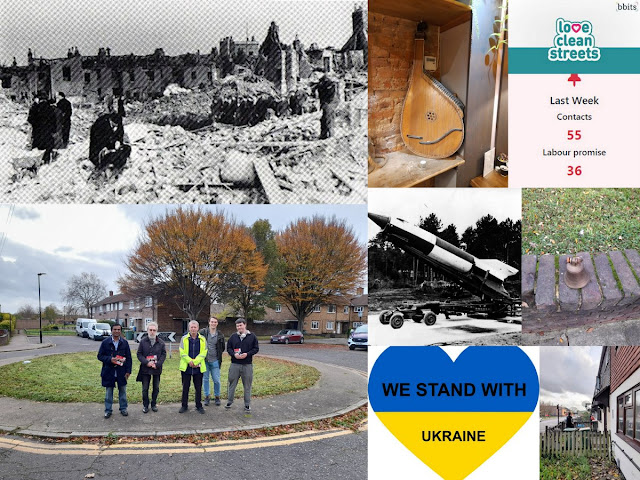 Yesterday I helped organise a Labour campaign session in the ward that I represent as a Councillor in Newham, West Ham with my colleague Cllr John Whitworth. It was great that we had a number of Party  members joining us including Plastow Councillor, John Morris, (so there was 3 John's on the team) local party members and also Jordan, a UNISON Labour Link activist from Camden.

During the canvass we stopped off to honour (see picture) the roundabout in what is now called Marriott Road, which I believe is the impact site of a German Nazi V2 Rocket attack on 1 Feb 1945.

See an account of the carnage at this site below:-

"In the early hours of 1st February 1945 at 3:03 am, Hitler’s last weapon of terror, a V-2 Rocket, left a trail of death and destruction on the sleeping street. An unmanned, guided, ballistic missile that had a maximum speed of 3440 mph, flying at an altitude of 52-60 miles, and carrying a warhead of 2150lbs of high explosives dropped without warning onto the sleeping Barnby Street, at up to four times the speed of sound. The ultra-high-speed descent meant that no sound was heard by those about to be hit. The effects of the resulting explosion were catastrophic, the explosion and subsequent sonic boom were heard all over London.

On that cold winters night, in just a few short seconds 29 people lost their lives and 15 others were seriously injured. Houses were totally destroyed and the surrounding streets were severely bomb blasted".

A local resident told us that when she moved into her home right next to the roundabout she was told by the housing officer that this was the site of a mass grave of the dead. I told her that I didn't think that this was strictly accurate.

Marriott Road is also named after a local firefighter who was killed during the blitz. We must do something to remember him and the dead 29 civilians by the next anniversary on 1 Feb 2023.

After the canvass we went for coffee (and brunch for some) in the Sawmill cafe in West Ham Lane, which is run by a local Ukrainian family. While enjoying my brunch, I will admit that I felt what happened to Eastenders in 1945 must be similar to the experience of so many Ukrainians in 2022.

Both victims of vile Nazi aggression. That picture of devastation and death in the collage is the same as so many modern day pictures in Ukraine.

Solidarity to Ukraine in their fight against Putin fascism!