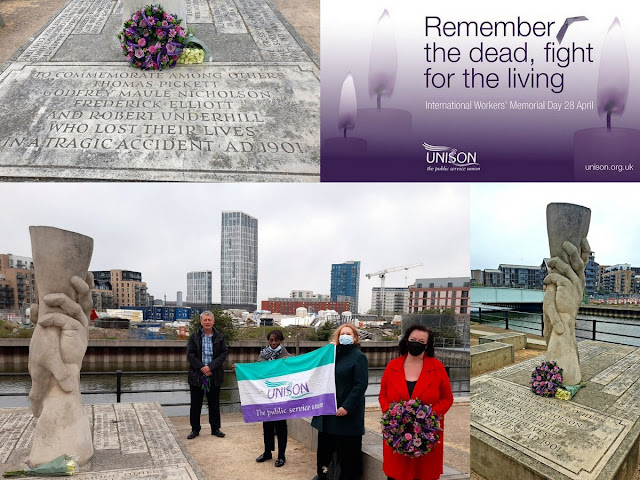 Today is International Workers Memorial Day and this afternoon we remembered all those who have been killed at work or died of work related diseases at the beautiful "Clasping Hands" sculpture and memorial in Three Mills Green, Newham, East London.

The memorial remembers "Godfrey Maule Nicholson, Manager Of A Stratford Distillery, George Elliott And Robert Underhill, Workmen, Successively Went Down A Well To Rescue Comrades And Were Poisoned By Gas. July 12 1901". How sad and how fitting to remember this on this particular day.

Our Local Member of Parliament, Lyn Brown, a long standing UNISON member, laid a wreath on behalf of my trade union branch, Greater London UNISON Housing Associations, who have organised memorial events here for many years.

Due to Covid we were restricted this year on who could attend but many thanks to Lyn, Andrew (National UNISON officer for Community), Sonya and Eunice (UNISON activists) for attending.

Hopefully next year we will be able to organise properly and have a bigger and more inclusive event.

Lyn gave a lovely little speech about about how important this occasion was to her as a the local MP to honour workers, such as Robert Underhill, who must have gone down the well on that day, knowing what had happened to those who had tried beforehand to rescue others, but he still risked his life to save others and paid the ultimate price for doing so.

Lyn also mentioned "Uncle Harry". By coincidence this morning I received an email from the niece of Henry (Harry) Turner. She had seen notice of this event on the TUC website. Some 200 yards away from this sculpture, her uncle Harry, had been killed in 1965 during an explosion, in the Sun Flour Mill. He had been working at the site while employed by the London Electricity Board (so possibly a member of UNISON's predecessor trade unions?) . Four people were killed by the explosion.
There are already the names of other workers killed nearby as well as those from 1901 on the memorial plinth. So maybe we should consider whether other names such as Uncle Harry should be added.
Posted by John Gray at Wednesday, April 28, 2021