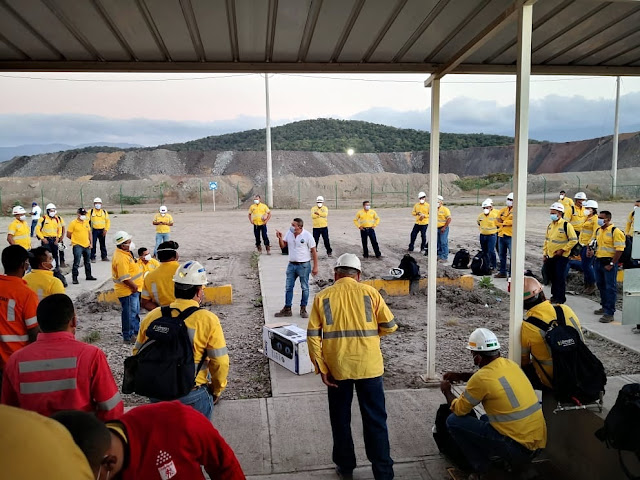 Last week I chaired this webinar on behalf of the Local Authority Pension Fund Forum (LAPFF). While it can at times be tough being a trade union activist in this country it is nothing to the perils and physical dangers facing Colombian trade unions.

Check out this account of the meeting below by LAPFF (video of meeting can be seen by its members of their website) and also the article on the IndustriALL website  http://www.industriall-union.org/colombian-worker-perspectives-from-cerrejon-coal-mine (picture credit above)

"On 8 April, LAPFF Vice Chair, Cllr John Gray hosted a webinar with IndustriALL Global Union to provide investors with an update on how Cerrejón’s operations are affecting workers in Colombia. This webinar follows on from a recent LAPFF webinar with a community member affected by Cerrejón. Two workers from SINTRACARBON, a national union of the Colombian coal industry and the main union at Cerrejón, spoke about serious health and safety concerns at the mine.d

After Cerrejón and the union recently concluded a collective agreement, the company turned around and implemented a punishing shift change that will have serious health and safety implications for workers and their families, and an enormous impact on jobs at the mine. In what the union is calling a “jobs slaughter”, Cerrejón is now talking of 450 dismissals in connection with the shift change, with workers’ rights being sacrificed as the mine’s three owners, BHP, Glencore and AngloAmerican, seek to exit thermal coal. Igor Kareld Díaz López, president of SINTRACARBON, spoke about the labor situation at Cerrejón, the actions workers have taken in response, and why Cerrejón and its owners need to take workers’ rights seriously. He also addressed questions about a “just transition” at the mine.

Further, all three companies say that diversity and inclusion are integral to their success are very public in their efforts in training and hiring more women. Unfortunately, these gestures do not reflect the reality for women. Behind the narrative, there are still huge gaps as to how diversity and gender equality are addressed in reality. Hidanora Pérez, a Sintracarbón union leader employed at Cerrejón, addressed existing gender discrimination and inequality at the mine and described what her union is doing to hold the mine to account for the gaps between policy and implementation".
Posted by John Gray at Friday, April 16, 2021