Westminster Foundation for Democracy comes to learn from Newham elections 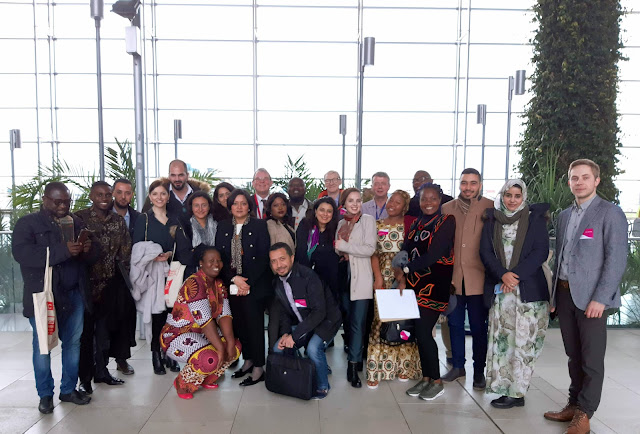 This morning I attended a briefing with Newham Mayor, Rokhsana Fiaz, in Newham Dockside with young potential leaders from all over the world brought to the UK by the Westminster Foundation for Democracy (A UK funded public body). They were here to listen to our Monitoring officer (the Council Chief legal officer) give a talk on British election processes.

It was fascinating to listen to the comments and questions raised. Many were slightly shocked that you did not have to prove your identity at a polling station in order to vote or had your finger dipped in ink etc. It is done on trust.

There was some interesting interaction when slides of incorrectly filled out election ballot papers were shown and everyone was asked if these were valid votes that should be counted or are they "spoilt" votes and therefore should not? The test is whether voter intention is clear or not.

I have seen some extremely rude "spoilt" ballot papers over the years and I was glad that they were not shown!

The British election process is far from perfect and I believe strongly that we have much to learn from other countries about improving our democracy - such as proportional representation, elected head of state, written constitution.

However, when I discussed this with one of the young leaders from a country in Eastern Europe currently facing dreadful problems she said "No, you are not perfect but you have set the measure that we must reach".

Thanks to Newham Councillor, Alan Griffiths, who helped to organise the visit.
Posted by John Gray at Tuesday, March 10, 2020

What on earth has this got to do with running the Borough of Newham? You just love the adulation and flattered by a group of young people enjoying a free trip in London, but does it really take so many of you to go and lap it up. I think many of the Councillors believe they are MP's, and actually you're not. If you put a bit more energy into managing the borough rather than wasting time on your own egos' we would all be better off. This is my question....How did this move the programme forward for a single resident?

You have surpassed yourself. What a mean spirited and small minded comment. Many of those young people come from countries who have suffered from dictatorships, mass murder and gulags. I am 100% certain that the overwhelming majority of Newham residents would be fully behind supporting democracy in this way.

Apart from a few sad and embittered haters.

As our council tax demands drop through the letterbox this month I would say do the ratepayers a favour John, and at least spend some time on the day job.

Not that we have domestic rate payers anymore but many thanks for the advice.

Of course. Everyone loves check (apart from trolls)