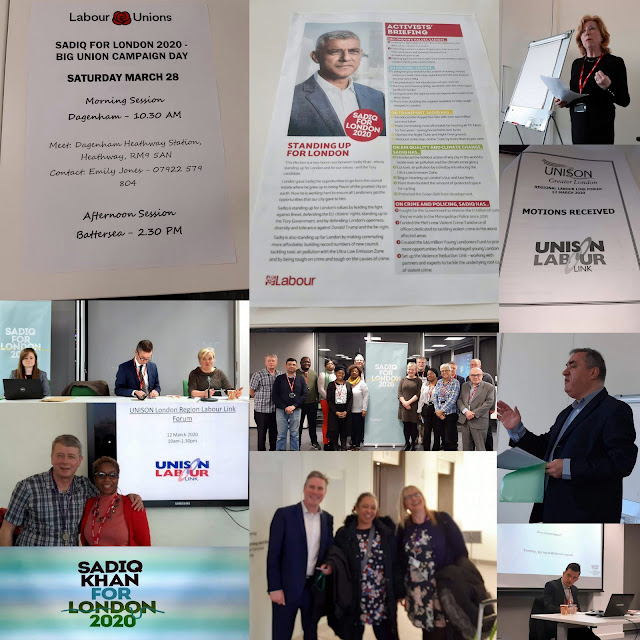 A busy Labour movement day. Firstly I chaired the Greater London UNISON Labour Link Annual Forum. Our guest speaker was Assembly member,Len Duvall, who is a longstanding UNISON member and the Labour Leader in the London Assembly.

Len gave a passionate speech about the need to support our Labour candidate, Sadiq Khan, for London Mayor and why we need and can win the marginal seats.

I stood back from the Chair to speak on an amendment to a motion on Local Government funding to include opposition to the Government's dreadful "First Homes" proposals to give private builders  money that should be used to build social rented homes (e.g our section 106 money).

This is what Tories do when they are in power and we must defeat them in a future General election.

Also I opposed a motion calling for full reselections for all Labour MPs even if local party members are happy with them and think they are doing a good job.

I am pleased that both of my arguments were accepted and it was also good to see a range of speakers participated in these debates.

After Forum my branch delegate, Doreen and I "bumped" into UNISON Labour Leadership candidate, Keir Starmer and got I a picture with Keir, Doreen and my Welsh Paramedic NEC comrade, Angie Roberts.

I then went to the UNISON activist floor on the 8th floor and did work emails and phone calls.

At 6pm we had a Labour Unions event also at the Unison Centre to support Sadiq Khan for London Mayor. This was another positive meeting and first we had Sadiq's organisers to talk about the campaign and tactics.

Then we had Deputy Mayor for London, Fiona Twycross, give a great political speech about why we need to support Sadiq.  But also a sombre expert report on why we should trust our Chief Medical Officer and public health experts on measures to tackle Coronavirus but to hold them and the government to account in a measured and pragmatic way.

UPDATE: All local elections called off until 2021 due to Coronavirus.
Posted by John Gray at Thursday, March 12, 2020

You mean "sombre" and not somber.. Mr.deputy Mayor

Thanks for being my proofreader! changed.

Got that lucky shirt on again!

abusive colour blind troll comment deleted (who doesn't know who is the mayor!). Enough is enough. Any more trolling will just be deleted from now on. Go and find somewhere else to play.