Solidarity: A film about blacklisting 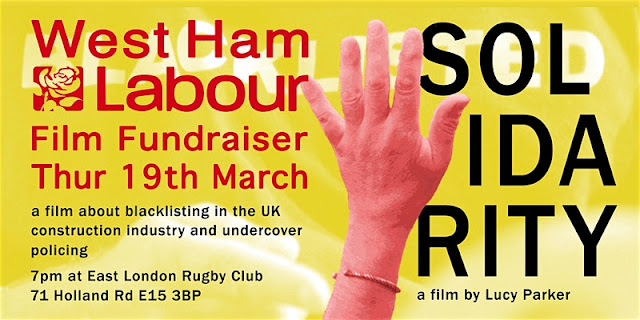 (My TUC tutor Dave Smith, was blacklisted from the construction industry and forced to retrain as a teacher. He said during the 1980s London building boom he was the only trained carpenter who had to rely on milk tokens to feed his family.)

West Ham Labour Party invites you to the screening of Solidarity, a film about the secretive methods used against UK activists and trade unionists. In the film blacklisted construction workers and activists spied on by the police share their ongoing struggles.

Blacklisting in the UK construction industry impacted thousands of workers who were labelled 'troublemakers' for speaking out and secretively denied employment. Activists uncovered alarming links between workplace blacklisting and undercover policing. Solidarity attentively follows meetings between activists and law students, brought together for the film, revealing the determination of a community working together to find a route to justice.

The debut feature length film by artist filmmaker Lucy Parker it has been made alongside and features members of Blacklist Support Group, core participants in Undercover Policing Inquiry (SpyCops) and members of other campaigning groups.

Doors open at 7
Film starts at 7.30pm sharp and is 76 mins
After film there will be a Q&A with an activist from the construction industry and a participant in the undercover policing enquiry

The venue has a bar and is fully accessible.
There is also free parking
Posted by John Gray at Wednesday, March 04, 2020