A day in the life of a Labour movement activist 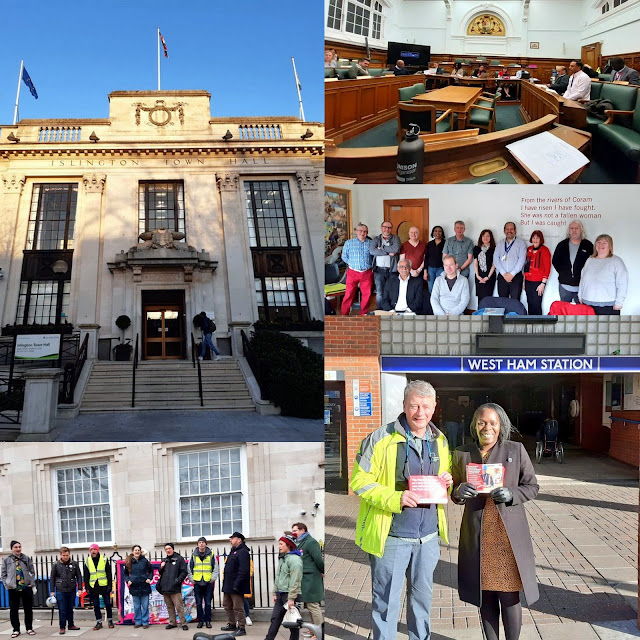 I had a busy day today but a really worthwhile one. Started off by cycling to West Ham station to meet my Councillor Ward Colleague (and fellow Deputy Mayor) Charlene Mclean and hand out leaflets to commuters, supporting Sadiq Khan, who is standing to be re-elected as London Mayor in May. It was cold but at least it was not raining!

Then went into Central London (via tube & Ken Bike) to chair a forum meeting of UNISON London Local Government Pension Scheme (LGPS) representatives from 10 different funds. We had Eve Keith, who is the UNISON Staff Pension fund manager as our guest speaker, who gave a fascinating account of her day job. Afterwards we also discussed problems with fund administration, taxation and the London CIV.

Ken biked to UNISON centre for lunch at canteen (with by chance a long standing Labour NEC member).

On the way via Ken Bike to another LGPS Pension meeting in Islington Town Hall (this time with Councillors & officers) I stopped off on route to show support and solidarity to members of UCU (University and College Union) at their picket line in Tavistock Square who are on strike over pensions and pay.

This was the first time I have ever been inside Islington Town Hall and it is a stunning building.

Afterwards I took tube back to West Ham, picked up my bike and cycled to East Ham Town Hall for a Cabinet meeting. At this meeting I presented two reports. First one was the possible purchase of a newly build block of flats in East Ham for Council tenants. Which is subject to terms being agreed but I am really pleased that we are actively seeking to acquire desperately needed homes using Right to Buy receipts and prudential borrowing. This was agreed in principal.

The second proposal was the Cyclical Decorations & Repairs Programme.  Another positive report. As well as building and acquiring new homes we are going to decorate and improve our existing housing stock. This was passed as well.

Troll deleted. They have no idea about trade unions or the Labour Movement :-)

How many shirts have you got?