Carol Sewell: Why I’m standing to be a member of Labour’s NEC 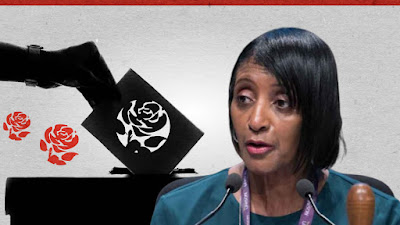 “BAME Labour members need a strong, experienced voice on our national executive committee. That is why I’m standing – because with decades of experience as a trade unionist, I know what it takes to make our voices heard. In recent years, we’ve seen a welcome and much needed rise in the number of BAME Labour MPs – especially BAME women – elected to parliament. It’s critical that Labour continues to push for all-BAME shortlists to ensure that our party and our parliament are representative of the country we seek to govern.
But we also have to work much harder to ensure greater representation in local government as well. One third of single-tier local authorities have no BAME councillors, so we should also be investing more in encouraging our talented BAME members to stand for election at all levels and in every part of the country. Ensuring that our voices are heard from the Commons chamber to the council chamber is vital.
As a local government worker with decades of experience providing housing and benefit services in Birmingham and Walsall, I know what savage cuts look like. I have seen the harm that has been done to local government and the vulnerable people in communities that rely on its services. Too often those failed by our government are from BAME communities. Better representation is critical to fighting that injustice.
The fight for representation must also extend into our own party’s structures. As Labour develops a new BAME organisation, it’s vital that the person representing BAME members on the NEC is someone with a track record of working across diverse communities and bringing people together. As chair of UNISON’s black members committee, I’ve shown I have the skills to do just that. And the nominations I’ve been proud to receive in this contest show the broad coalition I’m capable of building.
I am delighted to be backed by 43 constituency Labour parties (CLPs) from every part of our country and party, and I’ve got support from some of the biggest and best unions in the country – my own union UNISON, as well as USDAW, Community and GMB. I know that our movement and our party are strongest when we’re united behind a common cause. After four painful election defeats, our cause now must be coming together behind the next leader and taking our values into government.
I am backing Keir Starmer, but whoever is elected in April, I will get behind them if they are willing to empower our BAME members. Our voices must be heard at the very highest levels of our party. But they must also be heard in our CLP meetings and council chambers too. I will fight for greater representation at all levels, and I’ll be a champion for diversity, campaigning to ensure that Labour reflects all parts of our communities.
Hat tip Labourlist
Posted by John Gray at Monday, March 02, 2020

Makes sense - I guess that is why you are supporting Grammar school Oxford educated and white middle aged candidate Keir Starmer… sorry I meant "Sir" Keir Starmer to be Party leader..? Right On.

A dream team. Keir Starmer, son of a tool maker and a nurse, named after the founder of the Labour Party.

Any leader of the Party will need an NEC which will be supportive but also hold the leader to account. Carol is that sort of person.

Bored with aggressive, VERY ANGRY trolls. What is wrong with these people?

Interesting to see where Sir Keir obtained his donations from.. I'm sure as a good socialist he will declare them soon.

..and at the same time as you adhering to this "right on" doctrinal crap, spouted by a "Labour" leadership composed almost solely of middle aged white men (such as yourself) the Labour Party suspends Trevor Phillips, one of the most articulate and passionate advocates for free speech and leading advocate against racism. Laughable. You guys are really losing it now.

What silliness. None of us know what are the complaints against Trevor Phillips. I was shocked that he was suspended but we have to allow the process to continue as Trevor himself wished against those accused of Antisemitism.

...BTW and what are the tories doing about their racists? a big fat nothing comes to mind

Mr Mahmood (Lab Perry Barr), the first Muslim to be elected as an MP in England, called the suspension “a sad – and frankly embarrassing – episode for my party”.Mr Mahmood said: “It was with no small measure of astonishment that I learnt that my own party, the Labour Party, had initiated proceedings against Trevor Phillips on grounds of ‘racism’ and ‘Islamophobia’. The charges are so outlandish as to bring disrepute on all involved in making them; and I fear they further add to the sense that we, as a party, have badly lost our way.”

Maybe he is right and maybe he is wrong. Roll on a properly resourced and independent complaints body.

Trevor Phillips - the son of a postal worker - first black President of the NUS - kicked out of Labour! Appalling! and what's John's answer... of course its the politically expedient one - "Errr? Wait and see? Errr?... take a stand John for once in your life rather than following the Party dogma.