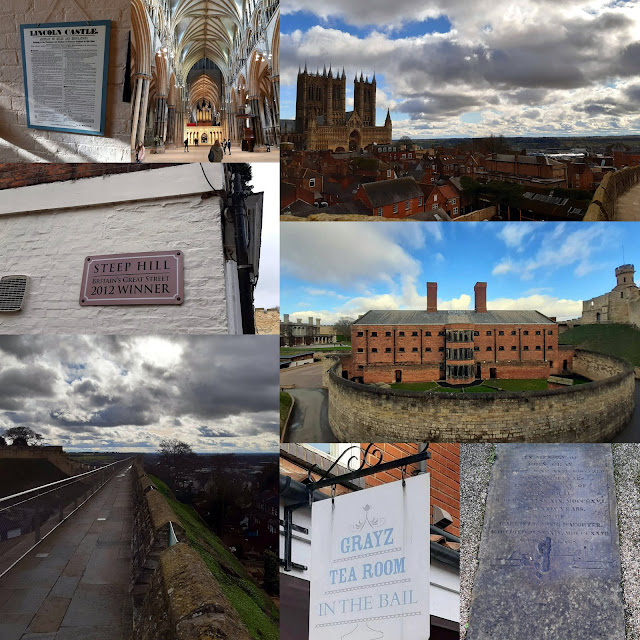 Off message-ish. Last month we went to Lincolnshire to visit my little sister and our nephew (and his lovely family).

On the Sunday we went to Lincoln to visit the historic city centre. A fascinating place to spend a few hours. Despite Lincolnshire being notoriously flat, the city has one of the steepest roads in the UK (see collage).

Soon after we arrived as we walked along a former church yard (built on the site of the former Roman city forum) my sister noticed some some grave stones laid out flat, one of which remembered a John Gray and his family who died (I think since not very legible) in the 18th century. Pretty spooky start.

The Castle is well worth a visit. You can get a ticket to walk along its medieval walls, visit the Victorian Prison, view a copy of the Magna Charter and visit the nearby Cathedral.

The views from the Castle walls are simply amazing. You can also walk up the same steps taken by condemned men and women to the top of a tower where public executions used to be held and watched by tens of thousands of spectators. Later along the walls you come across a rather sad & forlorn burial area where executed prisoners and those who had died in the prison were buried.

Before you enter the Victorian prison, visit the Magna Carta exhibition (and watch the introductory film). The Magna Carta was an attempt by feudal barons and lords in 1215 to force King John to cede to them some royal powers. While it was never intended at the time by the King or the rebellious barons to have wider consequences, it did eventually enshine the principle that the King was subject to the rule of law.

The guide in the actual display room said that in 1217 when the related "Charter of the Forest" was signed, this was actually more important to most people of the time, since it meant that they regained their rights of access to the royal forests for food, fireward and grazing.

The Prison is amazing (the chapel especially) and we should be so grateful that we do not live in a society that treats petty criminals and the vulnerable in such a barbaric way.

After a lunch time roast dinner in the Wig & Mitre in Steep Street, we went to the Cathedral and were able to admire the magnificent stained  glass windows and listen to the beautiful Choir.

On way back to our starting point we came across a tea room called "GRAYZ"...I have no idea why...
Posted by John Gray at Wednesday, March 11, 2020