Race, gender, class in the "Mother of Parliaments" 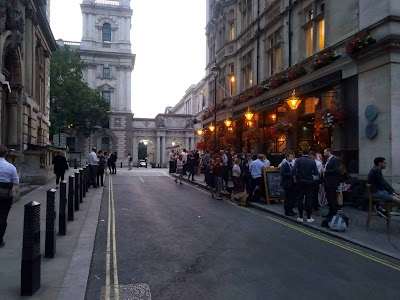 Recently I went to a late afternoon event in the House of Commons then afterwards had a drink (or three) with a colleague in a nearby pub.

The pub and road outside became full with drinkers enjoying the end of the workday and the glorious sunshine.

The picture right was taken later but there was probably around 100 people at its peak.

My colleague had worked in and around Parliament for many years and was very entertaining about the various MPs, Lords, journalists, lobbyists and party hacks who passed us by while we enjoyed our beers. Some of whom greeted him warmly. Some didn't. The vast majority of drinkers had some direct or indirect connection with Government.

I must admit that the lack of of diversity was pretty damn obvious. At a peak I only saw about 5 black men and no black women. I wonder how many of the 100  (or so) were working class from state schools? I suspect very few.

We still have a long, long way to go to making our society fairer and more inclusive.