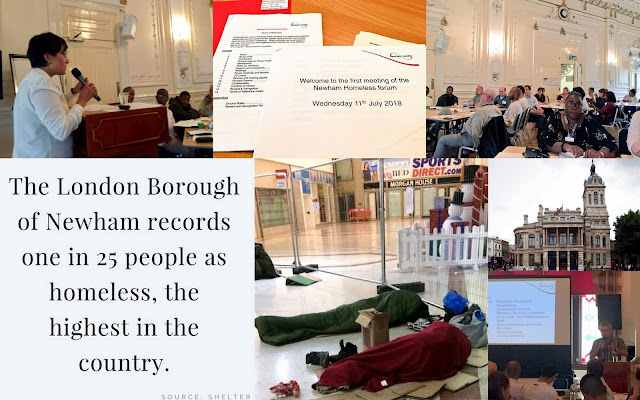 Picture collage of yesterday's well attended initial meeting of stakeholders from across Newham, including residents who have experienced homelessness, faith groups, Government agencies, NGOs and Council officers.  It took place in the historic former Borough of West Ham Council chamber in the Old Town Hall Stratford.

I chaired the meeting and our guest speaker was our newly directed elected Mayor, Rokhsana Fiaz. She made it clear that as a Council we are committed to address the scandal of homelessness in our borough in collaboration with all stakeholders.

After introductory speeches we broke into workgroups which debated terminology, terms of reference, code of conduct and next steps.

I thought that the meeting went really well even though there is clearly a trust issue with the Council which I hope we are on the way to overcoming. To be clear, we are not going to be able to solve the homelessness crisis in Newham until we have a Government in power which remembers its duty to ensure that all its people has access to decent and truly affordable housing. Yet we are convinced in Newham that by working together we will make a significant difference to the crisis.

This does not mean we will always agree on everything but should mean we share common goals,  common aims and objectives to do what we can to challenge the scourge of homelessness in all its forms.
Posted by John Gray at Thursday, July 12, 2018