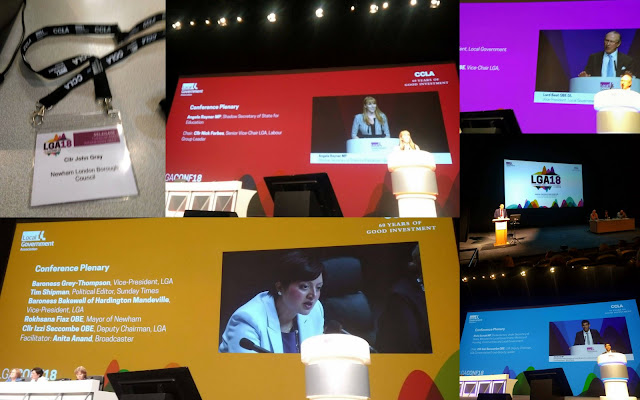 This post is a little late but some thoughts from a first time delegate to the annual Local Government Association Conference in Birmingham. I arrived late due to attending Newham Cabinet meeting.  My Newham Cabinet colleague, Terry Paul, was there to greet me and give me the benefit of his extensive views on the first day of conference and the day ahead.

Below is based upon my tweets on the second day of LGA Tuesday 3 July.

"At #LGAconf18 with Lord Richard Best (respected independent peer in House of Lords) making an opening speech about the "Revolution" in #housing since 2015. The failure of UK house builders is key to this revolution. UK House builders are a "hopeless industry". He detailed 10 significant complaints about the industry which made (mostly) sense to me. I will try and find a link to his speech.

I asked a question to Lord Best about why getting access to all "right to buy" receipts & changes in regulation is all well & good but it is tinkering on the edges. We have 26k Households on our waiting list in Newham. The only way to really deal with housing crisis is for the Government to put its hands in their pocket & provide public subsidy.

Next was a plenary with @NewhamLondon Mayor @rokhsanafiaz and other panel members. There seemed to be some agreement that  #housing is our number one priority.

There was some heckling from Tories as Rokhsana tried to put forward a reasoned argument about why social care provision needs to be paid for by the state rather than sound bites. An aggressive journalist chair of the panel, was trying to paint Labour as the Loony left "tax and spend" Party.  Rokhsana was not having none of this.

Next I was at the workshop "Building the Right Homes in the Right Places" with Nick Walkley, the "man from the ministry" (CEO of Homes England NB not the regulator for London) as a panel speaker.

My question to this panel was on the possible role of Council #pension funds in provision of social housing & market rents (not forgetting pensions should be run first and foremost in the interests of beneficiaries)? The panel answer was "yes, good question but we haven't yet got total answer but "power to your elbow" for asking.

Make of this as you will but I thought positive?

After lunch we had a brilliant plenary speech by my long standing UNISON colleague and now Shadow Secretary of State for Education @AngelaRayner MP. "90 children entered care everyday. Lack of funding is dangerous and should be a National scandal".

Conservative Minister @RishiSunak spoke next about digital services revolution. He mentioned Hackney Council who had worked out that each physical visit by residents to the Council cost £12. While it cost £4 for each telephone call but only 30p for each online visit. He also said that research showed that 60% of social workers time is spent simply inputting data. He called for local government to "Fix the digital plumbing".

I asked him a question that while I totally get the benefits of digital we must never forget the large number of vulnerable residents who cannot access digital. We need to retain the human touch. He said he agreed & said you can recycle digital saving into providing frontline services.

Hackney Mayor, Philip Glanville, followed my question to him with a further one that a) we should be creating genuinely human centred services (local govt better @ this than Whitehall) & b) he needs to change attitudes in Govt, data sharing isn’t good enough, platforms need to be truly open & systems like Universal Credit are inhumane. (I don't think that Philip got a full reply).

I had to leave that evening for a UNISON forum in Newcastle. I must admit being on the whole impressed with the conference, the speeches, seminars and exhibitions. It is good to get out of your silos from time to time and be exposed to new ideas and views.