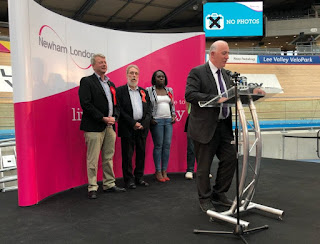 "Dear Members, Firstly, may I apologise for the lateness of this report. The past few months have been exceptionally busy (for all of us).

Many thanks to all everyone who supported Cllr Whitworth and myself to be reselected as your candidates in the elections in May and for all your help in us being re-elected with such massive majorities.

Welcome to our new ward colleague Cllr Charlene McLean and at the same time best wishes to my former West Ham colleague, Cllr Freda Bourne upon her retirement.

Congratulations to Cllr Whitworth on being elected by Newham Labour Group to be a Chair of Scrutiny and Cllr Mclean upon her appointment as Deputy Mayor by our new directly elected Mayor, Rokhsana Fiaz.

Shortly after the election I was also appointed by the Mayor, as Cabinet member for Housing Services and Chair of the Investment and Accounts Committee.

I have taken a leave of absence from my employer to carry out the role which so far, at least, I am finding fascinating but extremely challenging. Newham has nearly 26,000 households on its waiting list; private sector rents and house prices have shot up and arguably, we have the highest rate of homelessness in the country. While we will not solve the housing crisis in Newham without a change of government there are significant steps we can take to make a real difference.

I have attended 2 surgeries per month in Vicarage Lane Community Centre and Brassett Point Residents Association room. However, from next month due to the problems with Vicarage Lane (see “ward issues”) I am changing location and times as below :-

Examples of recent casework involve overgrown trees, disabled adaptations disrepair, “Right to buy” dispute over valuations, boundary wall disputes, home visits about damp/disrepair. I have made a number of repair reports via “Love Newham” app, I am still unimpressed with repair failures in the Church Street block run by One Housing Group despite a second meeting with management and residents.

Planning application in Abbey Road
An application for a huge private tower block next to the DLR station has now been submitted. Many residents are extremely concerned about the development. I have met with residents and developers and have submitted the concerns of residents. There will be future meetings. Cllr Whitworth is now on the Strategic Planning committee so will have to step back on this issue.

Apart from this set back there was a very successful awards event at the centre.

Workers Memorial Day 2018
On Saturday 28 April 2018 we had the most well attended event for many years. Many thanks for Lyn Brown MP and the Mayor (then a candidate) for attending and laying wreaths remembering all those killed at work or who have died of work related ill health at the Three Mills Green Memorial.

Rebecca Cheetham Nursery School
Due to time constraints I have been forced to resign as a School Governor but I have assured the school that if they need any help or assistance that they can still contact me. After 8 years it is probably time that they have someone new to replace me.

Lewisham By-election
With West Ham Labour colleagues I went on a canvassing session to this by election.

If any member wishes to contact me about this report to discuss any aspect please do not hesitate to do so.