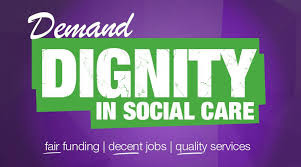 This judgement is bad news for hundreds of thousands of low paid care workers (including my
niece).

Being paid not even the national minimum wage for work is simply a disgrace. I hope UNISON lawyers can find a way forward on this.

If not we need to campaign to force employers to pay. Local authorities can play a role in this as well as unions. See UNISON press release below.


"The legal decision today (Friday) not to count sleep-in shifts as working time is wrong, and is at odds with legal precedents and a common sense understanding of what counts as work, says UNISON.
Today’s Court of Appeal judgment in favour of Mencap overturns a previous ruling at an employment appeal tribunal in April 2017.
UNISON took the initial case to an employment tribunal on behalf of care worker Claire Tomlinson-Blake. It argued that sleep-in shifts should count as working time, and should be paid at hourly minimum wage rates or higher.
The union argues that most care workers on sleep-in shifts aren’t sleeping. Most nights they have to get up to care for people, are on constant call, and are not free to come and go from their place of work.
Commenting on the case, UNISON general secretary Dave Prentis said: “This judgment is a mistake, but let’s be clear where the fault lies. The blame for this sorry state of affairs that’s hitting some of the country’s lowest paid workers must be laid at the government’s door.
“Ministers are so consumed by Brexit that they’re ignoring huge problems around them. Social care is in crisis, and this situation wouldn’t have arisen if the government had put enough money into the system and enforced minimum wage laws properly.
“Sleep-in shifts involve significant caring responsibilities, often for very vulnerable people. With too few staff on at night, most care workers are often on their feet all shift, only grabbing a few minutes sleep if they can.
“That’s why it’s such a disgrace that workers have been paid a pittance for sleep-ins – with some getting just £30 for a ten-hour shift.
“As a society we should value care staff and the work they do, but unfortunately we don’t. After this judgment who could blame care workers for leaving in their droves.”
As a result of the judgment, UNISON is considering an appeal to the Supreme Court.
Notes to editors:– Last autumn the government introduced the social care compliance scheme. This aims to ensure that companies and charities providing care services to the elderly and vulnerable adults settle the back-pay owed to staff for sleep-in shifts that haven’t been paid at minimum wage rates.– Most workers have not yet received any of their backdated wages, and it’s not clear what today’s ruling means for staff owed money.– More information on UNISON’s position on the social care compliance scheme is available here.
Posted by John Gray at Friday, July 13, 2018