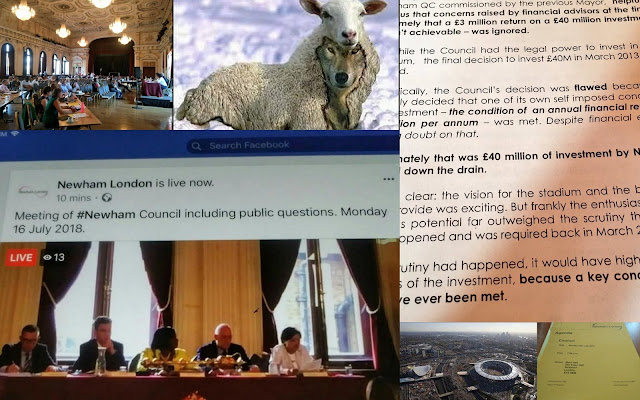 Tonight's Newham Full Council meeting was dominated by two key announcements by Mayor Rokhsana Fiaz in her report to Council.

Firsty, she announced the result of a QC investigation on the London Olympic Stadium debacle where Newham Council lost at least £54 million in a failed investment in the stadium.

Why did Newham go ahead with the original £40 million investment when even our financial advisors warned against it? Full report published tomorrow.

Secondly, the Mayor announced that Newham Council is pursuing legal action against Bank(s) over the selling to us of toxic LOBO loans, which is separate to the Court challenge announced by 14 other local authorities yesterday. Matter now "sub judice".

Not often I can say this but today was in my view a great day for Newham. Getting to the truth, holding people and institutions to account, seeking justice, learning from what has gone wrong while standing up for the interests of our residents.
Posted by John Gray at Monday, July 16, 2018