Green Point inspection and walkabout - the good, the not so good and art in tower blocks 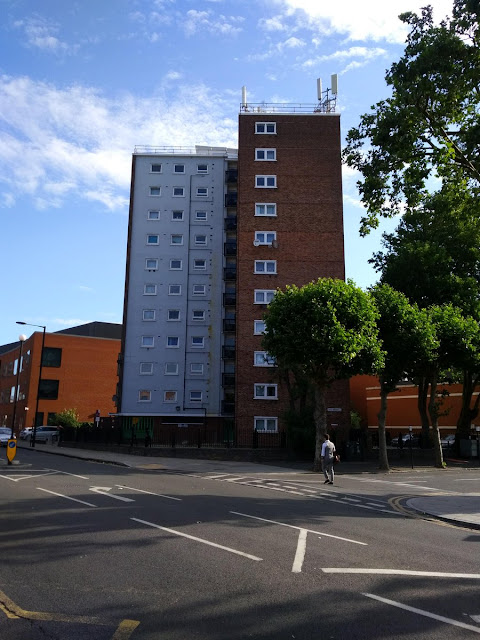 Last week I went on an 8am "walkabout" in Green Point, Water Lane, E15 with local residents in response to complaints about the failure to repair the communal front entry door, which had led to strangers getting into the block to take drugs and causing pretty unpleasant anti social behaviour.

The door has now been repaired but it had taken far too long and while now secure, it still needs further works. I took the lift up to the top of the block with 2 residents (before they had to go to work) and the block caretaker (who was there doing his morning clean and not because he knew I was coming).

There is a problem with the communal bin chutes on the 10th and 8th floor, which are closed off and I which I need to investigate (there are working chutes on 9th and 7th); gaps in pigeon netting on communal balconies; a broken communal window that was reported in April; some strange seemingly redundant appliances; fire exit gates with FB locks? the ubiquitous abandoned Morrison's shopping trolley; an overflowing recycling bin; 3 redundant contractor bins on ground floor and faulty communal bulkhead lights.

We need to do better on communal repairs to this block and I will be asking for reports on recent repairs but the good side of the walkabout was that the block was gleaming and there was only 1 piece of litter in the entire block. Credit to the local caretaker Alex and his colleagues.  Generally the block did appear to be in a good repair condition.

I want the same standard of cleaning in all housing blocks, estates and streets in Newham and repairs to the same high standard.

I talked to the residents about having "Art in Tower Blocks" (Newham Council owns a large number of paintings and other art works which are stored out of public view and I have often wondered whether we could not exhibit this art safely in the foyers of our housing estates?).

They were interested but were rightly concerned with getting repairs right first.