"A New Direction for the Labour Party" Motion 3 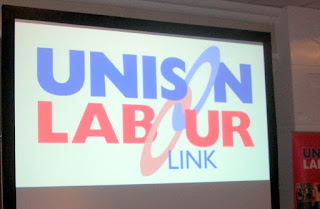 "A New Direction for the Labour Party" Motion 3 came from my branch and was adopted by the London UNISON Labour Link Forum as one of our two motions to National.  Gloria Hanson moved the motion. I'll post her speech tomorrow.

That there is no political alternative to the Labour Party, warts and all.

The last Labour Government despite its faults delivered massive benefits to our members and other working people. Pension credit and the minimum wage put real money into the pockets and purses of pensioners and the low paid. While it invested in the NHS, schools and protecting the vulnerable.

We note this Tory Coalition Government and its policies to favour of the wealthy, its plans to dismantle our NHS and the slashing and burning public services.

The Labour Party is the only hope for the future of progressive politics and obtaining social justice for our members and all other working people. We must all do whatever we can to ensure that a Labour Party government is returned at the next General election.

Yet we must also ensure that the next Labour Government is brave and decisive in tackling the evils it will inherit. Our economy needs to be rebalanced away from the free market liberalism of the recent past. We need a genuine mixed economy.

The income inequality gap between the rich and the poor in our society will be the key measure in judging the success or otherwise of a future Labour Government.

While we do not want to indulge in the pointless sloganising and postulating of those who do not have any credible alternative, we do want the next Labour Government to take the necessary action to reduce income inequality in our society.

This forum calls for UNISON Labour Link to carry on its work within affiliates, TULO and the Party to ensure that the next Labour government:-
Commits to reducing income inequality by the end of its term and delivers on this promise".