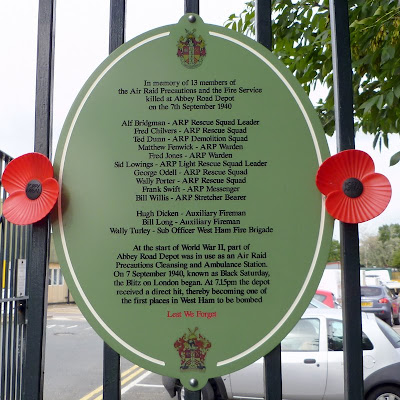 Last week I posted about the first day of the London Blitz in West Ham on 7 September 1940.  That day 5 civilians were killed in in their garden shelter's in Ranelagh Road, E15.

Yesterday I went on a ward "walkabout" with my fellow West Ham Councillors, Ron and Freda, together with senior Council officers.

We passed this memorial to 13 "Air Raid Precaution and Fire Service" personal who were killed on the same day at the Abbey Road Depot by German bombing.

This depot was first opened by West Ham Counicl 1896 and is still used now as a depot by Newham Homes.

Nearby Turley Close, E15 is named after Wally Turley. Turley was a sub officer in the West Ham Fire Brigade who was killed that day.
Posted by John Gray at Tuesday, September 14, 2010