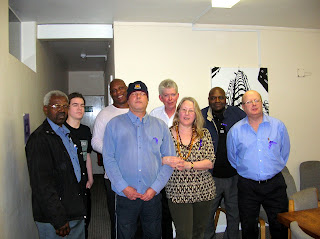 Last night Forest Gate North Labour Party branch (one of nine branches in West Ham Constituency Labour Party) voted unanimously for Lyn to be re-nominated as the Labour Party Parliamentary candidate for the next general election.

All sitting Labour Party MP’s have to face a trigger ballot for reselection. If a majority of local branches and affiliates support the sitting MP then they are deemed to have been reselected. If they do not get a majority then a full selection process will take place. Other candidates can then stand against the sitting MP.

Despite it being the eve of a Bank Holiday, 11 members eligible to vote turned up and all voted to re-nominate Lyn. John Saunders from the CLP Executive was there as their observer.

Lyn is a very proactive, well respected and poplar local MP, who has recently been promoted by the government to be the Personal Private Secretary to Phil Woolas, Minister of State, Department for Communities and Local Government (since 20 Nov 2006)
Posted by John Gray at Friday, April 06, 2007