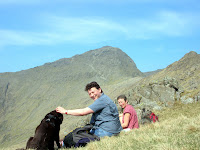 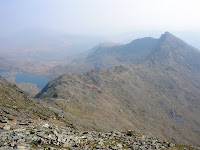 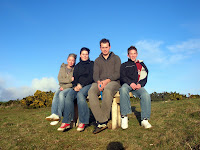 On route to summit of Yr Wyddfa (Snowdon - highest mountain in Wales) with my sister's Lucy and Helen (with daft Chocolate Labrador "Jazz" and very serious Boarder terrier with the even more daft name of "Chili"). Off message, of course, but we try to walk up Snowden every Easter to remember our Dad, John Gray, (1929-2002) who died of a heart attack on April 14 2002 while on a long distance walk ("wild camping" aged 73 against all medical advice!) practising for his 5th Camino de Santiago also known as "The Way of St James" (Spain). We scattered his ashes on top of Snowdon.

We walked up "Watkins path" (2nd picture) for the first time in many years. It is probably the most pretty and dramatic route in good weather (free parking) but the final climb through scree is pretty tough and only do it if you are well prepared (four hours up, 3 hours down).

The third picture is of Dad's grandchildren, Hannah, Rachel, Matthew and David on an oak bench we have put up on the Marian, Colwyn Bay. With a plaque that says "John Gray Passed this Way"

Despite being a lifelong atheist, Dad enjoyed the challenges and fellowship of taking part in the longest pilgrimages in Europe. He was also a life long member of the Labour Party, former Buckley Labour Councillor and trade union activist.

Ironically on April 14 2002 I took part in the London Marathon (never again! 4 hrs 24 mins) which caused some confusion on the day about which "John Gray" had actually died!