Rupa Huq out campaigning for votes in Bethnal Green & Bow 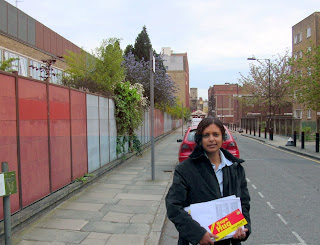 UNISON trade union member Rupa was out again tonight calling on local Labour Party members. Asking for their support for her to be their Labour Party Parliamentary Candidate in the next general election. On Thursday (26 April) there will be a hustings for the 450 members eligible to vote at Queen Mary, University of London, Mile End. There are 6 short listed candidates in total to choose from by transferable vote (this vote will be so tight that you must use all your preference votes). Each candidate will give a 5 minute speech then face a 5 minute Q&A from the audience:

Then on Saturday (28 April), there will also be a secret ballot of members which will be held at the Labour Party HQ in Cambridge Heath Road, Bethnal Green (10am to 5pm).

Rupa has been selected as a Candidate worthy of support by UNISON “Labour Link” National Parliamentary Panel. I think she would make an excellent “crossover” candidate who would appeal and unite all the different communities and interests in BG&B behind her and the Party. She is a Bangladeshi Muslim woman who is not only proud of her community and her roots but also to call herself British. She is a Cambridge University graduate and holds a doctorate, but is also a working Mum with a boisterous toddler.

Rupa has past experience of standing as a Labour Party candidate in General and European elections. She is a long standing Labour Party activist, very hard-working, bright, articulate and committed. She wants to take on “Respect” and return BG&B to Labour and she has the presentational and media skills necessary to do so.

Talking to Rupa you realise that she is Passionate (with a capital “P”!) about achieving Social Justice. Politics is not just about theories, but is about practical real life issues such as putting more money into pensioner's pockets, affordable child care for working parents, decent local housing & health services, combating crime and properly caring for our environment.

This will be an interesting week
Posted by John Gray at Tuesday, April 24, 2007

Rupa Huq did Unison proud at the hustings meeting to select the next Labour party candidate for Bethnal Green & Bow held at The People's Palace, Queen Mary College at 6.30 yesterday evening.
The event attracted 150+ members and featured 6 short short-listed candidates who drew lots for the order to speak.
The candidates had to speak for 5 minutes, then 4 questions were asked by members whose questions had been chosen in advance by the panel, then questioons were taken from the floor.
Lutfur Rahman kicked off, clearly nervous he gained confidence and did a workmanlike job of answering questions. The next on was Abbas who also performed creditably, followed by Shiria Khatun, whose media training stood her in good stead.
However the audience was quite restless and had to be given a toilet break as some had clearly ignored the injunction of chair, Josh Peck, to "go before".
John Biggs came on at 20.53 having had to endure an extra 20 minutes wait because of the weak bladdered members. He also performed well, as did Rushanara Ali, both gave good and detailed answers to questions.
By now it was 21.40 and the audience was distinctly restless. The trouble with the 4 set questions format was that some candidates answered them too quickly. Theaudience was not coming up withany interesting questions.
Rupa's entrance did not look propitious as she immediately dropped all her prompt cards on the floor and had to scrabble round to pick them up. But she soon recovered and gave a stirring performane; by the time the questions came she was in full stride, cracking jokes and batting comments back to questioners.
Rupa was the only candidate you didn't want to finish, she really injected some welly into what, until then, was more like a series of after dinner speeches.