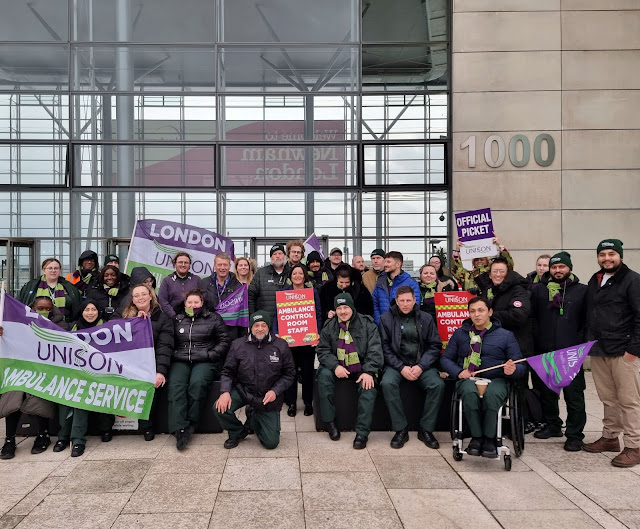 This afternoon I joined the UNISON LAS picket outside Newham Dockside Building, which is owned and used by the Council for its services but parts of the building are leased to London Ambulance Service (LAS) as its control centre for North London.

The strike call had been particularly solid and effective. When the LAS Branch secretary, Eddie Brand (see centre left of Mayor with his famous beard) arrived here this morning at a prearranged time, nearly the entire staff on duty walked out on strike and joined the picket.

Other Newham Labour Councillors had visited the picket line before and after but the Labour Mayor, Rokhsana Fiaz (UNISON Member) joined us and spoke a few words in support of the strikers.

Being a responsible branch and union, I observed Eddie approach the pickets after being contacted by local management, that they needed two of the strikers to return to duty to deal with an increase in priority emergency calls, for which two volunteers promptly agreed to return.

It was really great to chat and talk to the strikers about about the stress and strains of their job, the impact that the cost of living crisis was having on them and their families as well as national politics and the lack of a 24 hour canteen in Dockside!

On the way back I stopped off again at West Ham Ambulance Station and spoke to pickets who were braving the rain but receiving great support from car drivers hooting their horns in support. 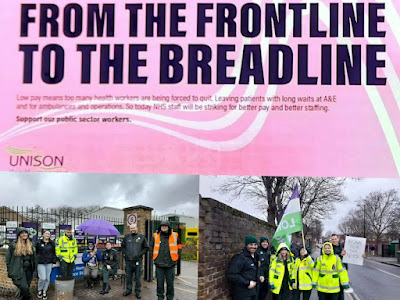