"Trade unions are more vital than ever - so why is the government attacking them?" 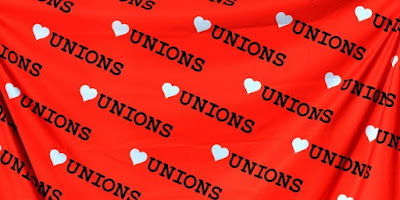 "As 2022 begins, a pandemic is raging, nearly a million workers are on zero-hours contracts, two million workers have no right to sick pay and five million earn less than the real living wage. And yet the business secretary, Kwasi Kwarteng, is making imposing new red tape on unions his workplace priority – and quietly tabling new anti-union legislation in Parliament.

The proposals would impose a levy on trade unions and allow five-figure fines for breaching complex trade union laws.

That’s money from the pockets of care workers, nurses and supermarket staff.

All the while, union members are on the frontline line of the coronavirus pandemic, working in schools, hospitals, shops, in public transport and in the services we all rely on.

Millions have turned to unions to protect their jobs, defend their rights and keep their workplaces safe.

Their unions have worked hard to support them in turn. But now valuable union time and money will be diverted, as unions are forced to jump through yet more hoops.

Now is the time to be working with unions, not undermining them

Let’s be frank. These reforms are based on ideology rather than being about solving the problems working people face.

Political parties don't pay a levy for the Electoral Commission. Charities don't fund the Charity Commission. Yet unions face a whopping seven-figure bill to pay for their regulator, the Certification Officer.

The government's own figures show that this levy will send dozens of unions into the red. And there is little to stop the Certification Officer hiking the levy year after year. Ministers have even dropped a promised review clause aimed at protecting unions from over-zealous regulation.

Then there are the huge financial penalties which could hit unions – fines of up to £20,000 for statutory breaches – which address a problem that doesn’t exist.

In the last financial year, the Certification Officer dealt with just 34 complaints. That's just one for every 200,000 union members. And not one of these resulted in an enforcement order requiring a union to take action.

That’s because unions are accountable to their members through their democratic structures and have a strong track record of complying with their legal duties.

What’s more, these changes would allow non-members to make complaints to the Certification Officer about trade unions. It doesn’t take much imagination to see the work of unions being hindered by vexatious complaints from hostile employers or campaign groups, particularly during legitimate industrial disputes.

The curious timing of these measures is underlined by the fact that this legislation is a relic of another age. Ministers at the Department for Business, Energy and Industrial Strategy have dusted off long-forgotten measures from the Cameron government’s 2016 Trade Union Act that were not enacted.

It begs the question – why now? This isn’t the case of simply tying up loose ends. If it was, ministers would have dealt with another outstanding issue from the Trade Union Act 2016: boosting union members’ democratic participation by trialling safe and secure electronic balloting for more union votes, such as the election of general secretaries.

It is telling of the government’s real concerns that they can spend valuable parliamentary time on new anti-union rules.

But the long-promised employment bill, intended to tackle insecure work and promote flexible working in the wake of Brexit, is still nowhere to be seen.

It’s time this government got its priorities right.

Now is the time to be working with unions, not undermining them. Around the world – from New Zealand to the US – governments are recognising the power of collective bargaining.

Next year, Parliament will debate and vote on these explicitly anti-union proposals. When that moment comes, MPs and peers should reject them wholesale – and instead join with unions and their members in delivering better pay and conditions for working people in every corner of the country".