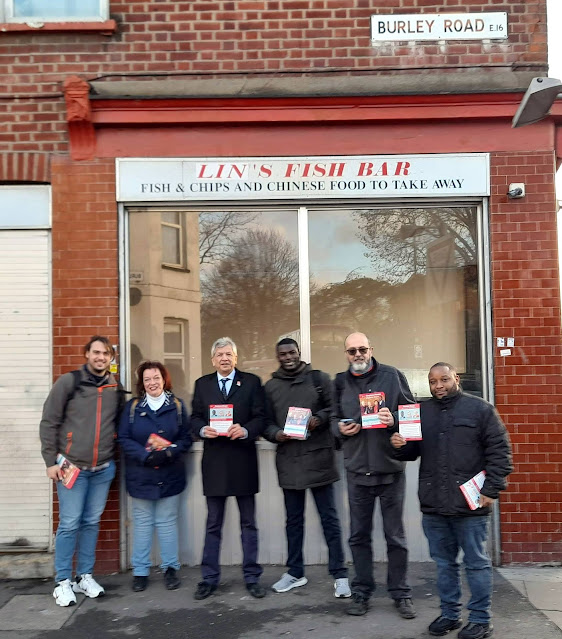 This afternoon I went out door knocking with our MP, Lyn Brown and our East London Assembly Member, Unmesh Desai.

We split into 2 teams. One led by local Councillor, James Beckles, with Party activist John Morris and the other by myself and activist Martin Warne.

It was cold but dry. I was using the Labour Party doorstep app so did not speak to that many residents but it was clear from feedback that we had significant support for Labour but a few had reservations. Our former leader, Jeremy Corbyn was brought up as a reason by some why they lost faith in Labour as a potential alternative government  but it was good that Keir Starmer was getting positive comments

But the only whelming reaction was that our residents were pleased that we were there knocking on their doors in December, listening and talking to them about their concerns.

Afterwards some of us went for a drink in the historic Black Lion pub in Plaistow and we shared some sea food from the local stall. The pub was busy with West Ham FC fans, who were obviously happy with the home win over Chelsea FC.

I had a little bit of  jellied eel, which was tasty but has a very strong flavour (the jelly puts me off) so I stuck to the pint of prawns and crab sticks.