Double Rainbow over Newham Dockside (Is there really a pot of gold buried in East Wing?) 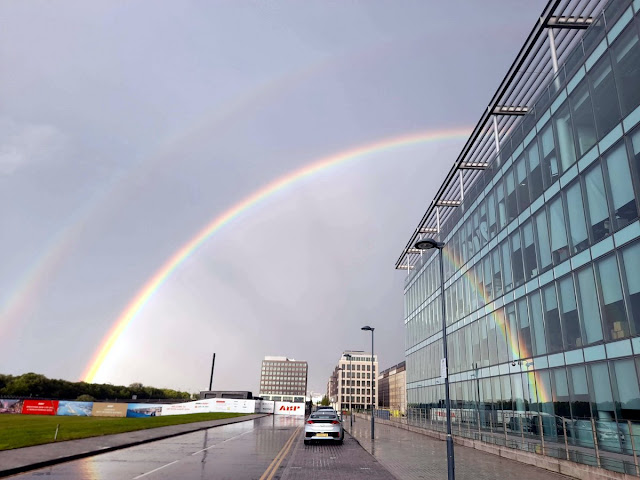 This evening I came out of Newham Dockside after a "in person/blended" Pension Committee meeting and was stunned to see a double rainbow across the skyline.

I have seen double rainbows in the past but I have never seen the rainbow being reflected in this way by glass windows.

It would appear that the end of the rainbow is in the East Wing of Newham Dockside. I think in the Facilities Management section.

Newham could definetely use a (large) pot of gold. I wonder if Terry & Conrad will be there with their pick and shovels first thing tomorrow? I would expect nothing less.

(1) Why are there ambulances parked up at one end of the building?

(2) Why are there scaffolding side the building? (on the waterfront side).

(3) There is a Brompton bike hire station, but it was n't working.

(4) The Council has to do something about the lunatic cyclists and e-scooters. It is a lovely waterfront walk, but ruined by the idiots who are going really fast. They are zipping in and out of people, but if I wanted to get run over I would walk in traffic. You can't let your guard down and I have plenty of close passes. They need speed restrictions on shared paths.... I like to cycle, but they are irresponsible and inconsiderate.

A group of teenagers were having a go in their high powered e-scooter and it big tyres, suspension system. It looked like they were doing 40mph.

I have been spooked a few times, by e-scooters on pavements.

Great efforts are being made to make cycling safer, but nothing to protect lunatics from fast cyclists / e-scooters.


It is making going for a walk unpleasant....

There is a blue cycle lane on the A13, why don't they use that? It is empty most of the time.

4] Cycling and e-bikes is a Police enforcement matter. While there are a tiny minority of idiots on bikes etc the far bigger threat is from idiot drivers