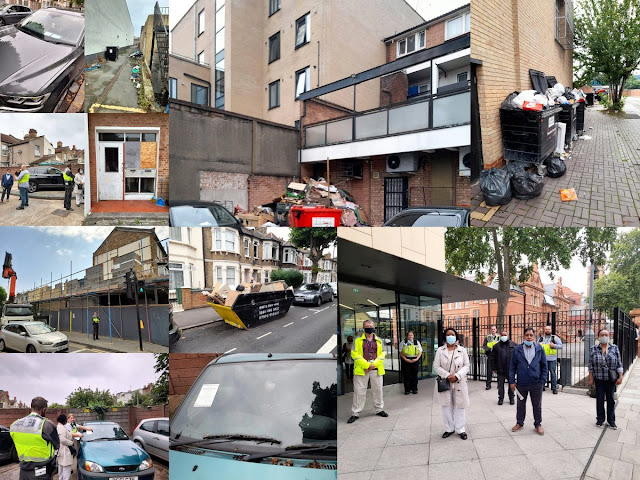 After many months of being a Covid "Stay at home" keyboard warrior today, I actually went on two outdoor "walkabouts".

First one was early morning with members of Newham Council ASB Scrutiny Commission and officers from our Community Safety and fly tipping team, which had been organised by our Chair, Cllr Daniel Lee-Phakoe.

We met outside East Ham library and then went with the enforcement team in and around East Ham High Street North to find out more about what they do.

It was fascinating to talk to them and then see these council officers in action.

They identified and issued removal notices on abandoned cars, took enforcement action on dangerous storage of potentially hazardous materials, made checks on road side skips and scaffolding sites to make sure they are legally licensed. They also checked on the use of disabled parking permits and seized a permit that they believed was being misused and reported that person, who was using the permit, for criminal prosecution.

We also came across fly tipping and the misuse of Council provided bins by private companies who should be responsible for clearing up their own rubbish.

It was also good to see Council enforcement officers in action and while being polite and respectful while they are doing their job by actively tackling ASB in one of our of most important High Streets in our borough.

I noticed that many residents also turned to the team for advice and support on various issues (including elderly residents who knew and trusted them and enjoyed talking to them).