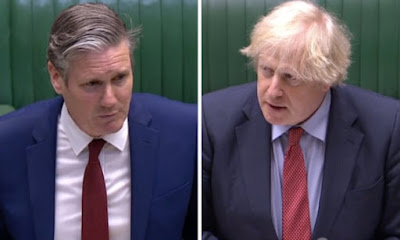 "Labour leader Keir Starmer has overtaken Boris Johnson as the public preferred choice for Prime Minister, according to the latest Opinium poll for The Observer.

Starmer is preferred to lead the country by 37% of voters polled on Thursday and Friday last week, compared with 35% who say Johnson would be the best Prime Minister.

While the Tories remain four points ahead of Starmer’s party on 43% to Labour’s 39%, the gap has closed from over 20% in February and early March when the Tories enjoyed a regular commanding lead as the country rallied behind the government, and Jeremy Corbyn was reaching the end of his time as Labour leader...".

Thank you John Gray , yes this brilliant news caught my eyes straightway & made me so happy that our labour leader Keir Starmer has more possibilities to become a future PM than Johnson! Keir Starmer has got different leadership style what is positive point for our labour party & action taken to put Government into account in COVID19 national crisis !

Thanks for the link. Yes, early days yet and no doubt there will be stumbles on the way but Keir is restoring the British public's faith in the Labour Party.