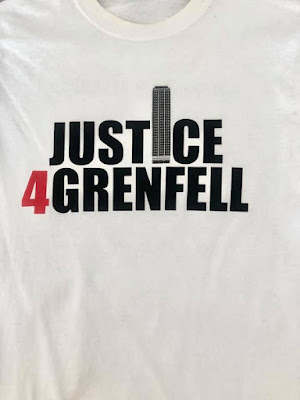 "Still no justice for the victims of the Grenfell Tower tragedy in North Kensington, which could have been avoided if residents where treated with the respect and dignity they deserved.
We read the news reports over the weekend that many of the residents that survived this horror have experienced racism, ‘cultural bullying’, indifference and arrogance by a charity tasked with supporting them: including discriminatory decision making and practices such as negative stereotyping by the Westway charity. These former Grenfell Tower residents still haven’t been housed in suitable permanent homes either.
The Labour Party has estimated that some 56,000 people are still living in homes wrapped in the same flammable cladding as the Grenfell Tower.
Three years on from the gross injustice which led to 72 people dying on the 14th June in Grenfell, tonight thousands and thousands of people and families will still be going to bed in unsafe homes.
Including thousands of leaseholders living in properties that remain potentially unsafe, they find themselves as ‘mortgage prisoners’ unable to sell their homes or re-mortgage; and face the prospect of facing huge costs as well existing on-going costs such as ‪24/7‬ ‘waking watches’.
Leaseholders who are unable to re-mortgage face being put in on very high variable interest contracts; and all blocks with cladding - regardless of height - face intrusive and destructive testing.
A survey by the UK Cladding Action Group (UKCAG), published last week, shows that 9 out of 10 of 550 leaseholders and tenants surveyed have experienced sleeping problems and other mental health issues including suicidal feelings and self-harm as they contend with the prospect of unsellable apartments and crippling bills.
UKCAG say that there some 262 private and social residential blocks still wrapped in similar aluminium composite cladding systems, found to be the main cause of the fire that spread at Grenfell Tower, that killed 72 people. They’ve also estimated that 1,700 buildings across the country have some form of other dangerous cladding that needs replacing and others have other fire safety defects. The journal, Inside Housing estimates that some 600,000 flats nationally are unsellable as a consequence.
This includes properties owned by Housing Associations and private developers in Newham; and we’ve been pressing and demanding that they do more; with cabinet lead Cllr John Gray and deputy Cllr Shaban Mohammed, leading on this urgent focus locally.
The Government’s £1 billion fund is grossly inadequate and does not include on-going costs such as waking watches. The fund was only announced last month to help pay for the replacement of dangerous non-ACM cladding, adding to £600m already set aside for the removal of ACM cladding on social housing blocks.
Their slow and inadequate progress of this is unjustified, and their guidance is causing anxiety, delay, and confusion as well as risking lives.
Three years on from Grenfell, the government must meet full costs of making these homes safe and cover the ongoing costs caused by their failure to regulate and bring in effective building controls.
Building contractors who failed to build homes, to even the inadequate standards of the time, must also be held accountable and pay up.
Cllrs John Gray and Shaban Mohammed are organising a special zoom conference with Housing Associations who operate in Newham, to establish their latest progress and demand that they speed up on behalf of residents; as well as demanding government and builders to pay up.
https://www.theguardian.com/…/the-guardian-view-on-the-gren…
Posted by John Gray at Sunday, June 14, 2020

>> Still no justice for the victims of the Grenfell Tower tragedy in North Kensington, which could have been avoided....

How could it have been avoided? How many councils and builders used the same cladding?

Housing Associations are professionals. They are not consumers. They got billions from the Government. If they have made mistakes, they should take out of their own pockets. Did the bosses of housing associations take a pay cut? What's their salary these days?. Half a million quid??

Where is the morale hazard?

In Germany, they banned the cladding.

If you look at the history of public spending, it is hopeless. Council tower blocks riddled with asbestos. That is another time bomb. Poorly built. Some of these ugly tower blocks have already been pulled down. is it good use of public money to tear down 20 or 30 year old buildings?

Councils had another go, at trying to fix of the past. They put cladding and made things worse.

How many council staff got fired over the cladding? These councils would employ experts to manage these multi-million pound projects. So why did they fail?. I tell you why - They have nothing to loose!

Lakarnal was another refurbishment project failure. It happened before Grenfell. People died there.


Why do you want the Government to bail out people who bought homes with claddings? They should it take up with builders and their insurers. They should have better consumer rights and protections. Ideally insurance.

If they can't, they should just have the cost of works added to their mortgage. If their half a million quid homes goes up in value, they are n't going to give that money back to the Government.

People who buy new homes, should get better guarantees. People are supposed to get 10 years guarantees. Apparently, there are too many loop holes.

Labour's London Pleasure Gardens loan was apparently at least £3.3million pounds - all lost. Labour councils are not brilliant at running anything, but they are brilliant at spending.

Housing associations are charities. the directors of the property companies who build the blocks are paid millions. government regulation not councils permitted unsafe cladding. builders and insurers argue they built according to government imposed safety standards of time. at least labour councils don't kill people. tory attacks on 'elf and safety kill

Wasn't Rotherham a Labour council? What went wrong there then?

the tories asked their pal Jimmy Savile to look into it?