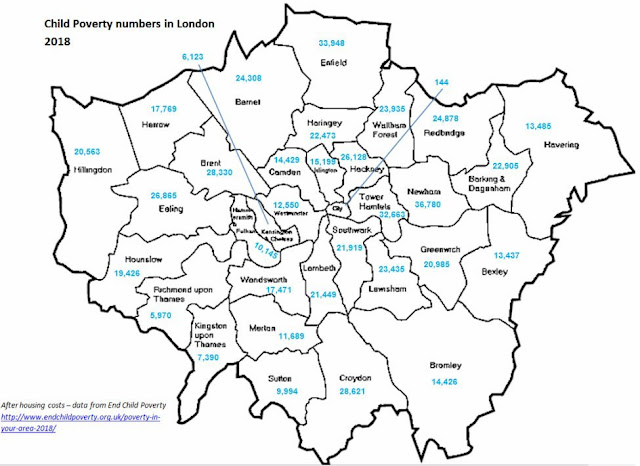 This is from a hard hitting report by the Child Poverty Action Group. 37% of children in London (700,000 kids) live in poverty. It is projected to rise 2019-2021 to 41.5%. What a shameful statistic for one of the richest cities in the world. 2/3rds of such children live in families where at least one parent works#.

You can download a London borough specific report here.

Newham has the highest child poverty numbers in London at 36,780 affecting 43% of all our children.

The reasons for this must be linked to fact we have the highest level of low paid residents at 36% (London average is 21%) as well as exorbitant housing costs. The average rent of the bottom 25% of Newham properties is a staggering £1200 per month and the lowest paid 25% of Newham residents spend 72% of their gross income on rent.

All this is a major reason why we in Newham have (arguably) the worst homelessness crisis in England.

#"A child is living in relative poverty if living in a household with below 60 per cent of contemporary median income, according to government measurements".

While I am convinced that the new Labour administration in Newham (I declare an interest) can make a huge transformational difference to many people's lives.  For example by building a 1000 Council homes at a social rent, community wealth building or tackling violence amongst young people by increasing the number of youth hubs. The sheer numbers mean that we will only be able to defeat child poverty in London by a change in Government.

We need a government in power that will tax those who can afford it to really provide for all our children in need.
Posted by John Gray at Thursday, November 01, 2018