Remembrance services to be held across Newham Sunday 11 November 2018 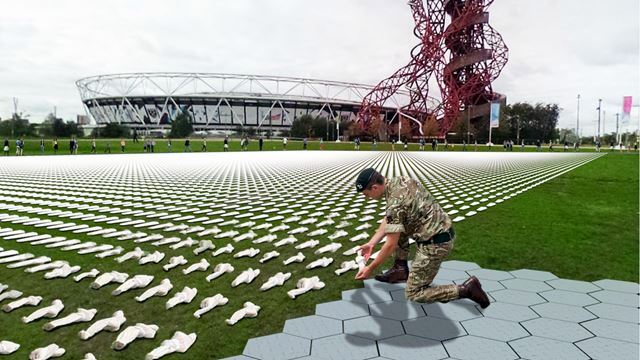 "Residents are invited to join Mayor of Newham Rokhsana Fiaz and the Royal British Legion at remembrance services to commemorate those who have lost their lives while serving their country.​​

Services are taking place across the borough and will include a Cenotaph parade in East Ham and an unforgettable and haunting art installation at Queen Elizabeth Olympic Park.

This year has added significance as it is the 100th anniversary of the Armistice, the agreement in which Germany surrendered to end fighting in Europe during the First World War.

On Sunday 11 November, Mayor Fiaz and Chief Executive Katherine Kerswell will attend a service of remembrance at Queen Elizabeth Olympic Park as part of the Shrouds of the Somme art installation. This art installation by Rob Heard depicts more than 72,000 people who were killed in the Battle of the Somme. The shrouds have been hand-stitched and will be laid shoulder to shoulder in hundreds of rows on the park’s South Lawn. The service starts at 10.30am and open to the public. Residents planning to attend should arrive at the park no later than 10am.

On the same day, Newham councillors will join residents and the Royal British Legion to reflect on the sacrifices made by members of the armed services and civilians in conflicts past and present.

The Royal British Legion will parade from Newham Town Hall, High Street South to Central Park at 10.30am ahead of the remembrance ceremony which will take place at the Cenotaph at 10.55am. The service will be led by Rev Fred Ashford-Okaim. Deputy Mayor Councillor Charlene McLean and Councillor Terence Paul will be in attendance.

Mayor Rokhsana Fiaz said: “It is important in this centenary year marking the end of the First World War that we remember all those men and women in our armed services, and civilians, who gave their lives to protect us in conflicts past and present. It is their sacrifices that inspire those who serve today and we must never forget them.”

Other services will be taking place on the following dates and locations:

A service of remembrance will be observed at 10.45am at the Cenotaph in Central Park, East Ham. A two-minute silence will take place at 11am. Schools invited include St Joachim’s, St Antony’s Primary, St Michael’s Primary, St Winefride’s Primary, St Bonaventure’s and St Angela’s Ursuline. Councillor Julianne Marriott will attend.

The East Ham branch of the Royal British Legion will be holding a service at Woodgrange Park Cemetery, off Romford Road, Forest Gate, E7, from 11am to 11.45am.

There will be a parade to St Mark’s Memorial departing from the Royal British Legion Club in Constance Street, Silvertown at 10.15am. An olive tree will be planted and the service, led by Canon Ann Easter, starts at 10.45am. Councillor Rachel Tripp will attend.

East London Cemetery, Hermit Road/Upper Road, E13 - There will be a short service at the cemetery from 10.45am to 11.10am led by Rev Ben Atkins, vicar of St Matthias Church, Canning Town.
Posted by John Gray at Tuesday, November 06, 2018