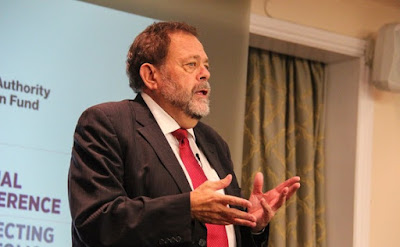 I was at a Newham Pension training last night and was shocked to hear of the death of Cllr Ian Greenwood.
I have known Ian for many years and he was a superb chair and Pension activist. A true friend as well of the trade union movement both here and abroad.

I can't believe that less than 12 months we also lost Kieran as Chair.

"The Local Authority Pension Fund Forum (LAPFF) has announced the sudden death of its chairman, Ian Greenwood, on Monday (12 November) night at age 68.

Greenwood was also chairman of the £46bn Northern Pool of the Local Government Pension Scheme (LGPS), having taken on that role in April, after being chairman and then deputy chairman of the West Yorkshire Pension Fund.
Awarded an OBE for services to local government in 2013, he was also a councillor at Bradford Metropolitan District Council, twice acting as its leader, and for West Yorkshire County Council.
Greenwood was also twice the LAPFF's chairman, first holding the role between 2008 and 2013, and then taking on the position again in July of this year following a period of interim service since January.
He had taken over both the Northern Pool and LAPFF roles from Kieran Quinn, who died in post on Christmas Day last year and was also chairman of the Greater Manchester Pension Fund.
In a short statement, the LAPFF expressed its "extreme shock and sadness".
Northern Pool vice-chairs Paul Doughty and Brenda Warrington also expressed their condolences, adding he "would be greatly missed by everyone who had the privilege of knowing him".
They added: "Ian was an inspirational and visionary leader whose knowledge and experience of local government pension schemes was invaluable.
"He truly believed and demonstrated by his leadership that ensuring ordinary people working in public sector jobs serving their communities get to live out their retirement years with security and dignity is a noble cause, and he brought great energy and significant personal commitment to that purpose.
"As Northern Pool chairman at a time of significant change, Ian was instrumental in putting in place simple but effective democratic structures that ensured we continue to deliver low costs and good investment returns for the funds' members and taxpayers alike."
Bradford Council leader Susan Hinchcliffe mourned the "enormous loss" of one of the "most recognisable" and "most influential figures in Bradford politics".
"He was immensely proud to be able to service the people of his home city, which he loved dearly, and he wore his passion for the place and its people like a badge of honour," she said.
"Ian was a pragmatic, big tent politician, motivated by an overwhelming desire to bring people together to do the right thing for Bradford. His leadership transcended cultural, community and political party boundaries and his legacy and impact will be long-lasting."
Posted by John Gray at Wednesday, November 14, 2018