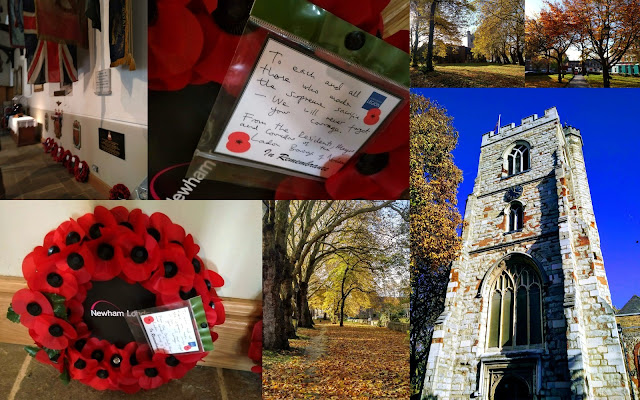 On Sunday I represented the Mayor and Newham Council at the 1918-2018 Remembrance Ceremony at West Ham Parish Church All Saints with Chair of Council Cllr Joy Laguda and our Director of Finance, Michael O'Donnell. With our local MP Lyn Brown, we each laid a wreath of poppies together with G Company 7 Rifles (our local British Army Reservist unit based nearby in West Ham), Police, British Legion and local residents.

It was good to see a large contingent of soldiers in uniform from our local regiment 7 Rifles present. In past Remembrance ceremonies at this Church, members of G Company had been on active service in Iraq and Afghanistan.  I am now of an age, that they all look too young to put their lives at risk and wish that fighting for all countries and all beliefs was only restricted to older folk such as myself over the age 50.  I doubt that many wars would still happen if this was so.

Chair of Newham Councillor Scrutiny Committees, Cllr John Whitworth and Councillor Winston Vaughan also attended (Cllr Vaughan is a British Army Veteran) While local Cllr, Jane Lofthouse actually had a lovely singing voice (and saved the reputation of the Council since none of us could hold a note).

Newham Council had supported 8 separate Remembrance events across the borough this historic weekend with the Mayor, Cabinet, Senior officers and Councillors attending.

The new Parish Priest, Revd Cannon Alex Summers, led an excellent and moving service (despite a heavy cold) and spoke about two of his great uncles, who were killed in the first world war. He and his young family had visited the war cemetery of one of his uncles in France and noted that the graves of British and German dead were buried alongside each other. It seemed fitting that former enemies were laid in peace together. I completely agree.

The Church is a beautiful Grade 1 listed building and was founded in the 12th Century.  I recommend a visit. There is a Beethoven Concert there on 24 November 2018 which I sadly cannot attend due to pre booked clash.

After the ceremony my wife Gill and I went over to the Queen Elizabeth Olympic Park to view the "Shrouds from the Somme". Visit, look and listen to the endless names of the unidentified dead. It is heartbreaking.
Posted by John Gray at Tuesday, November 13, 2018