"What I learned when I visited a refugee camp in Greece" 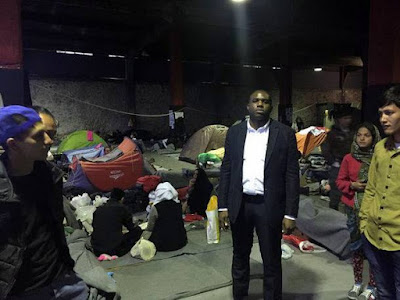 Last week I went on a (self funded) delegation visit organised by the Greece Solidarity Campaign to Athens. David Lammy MP was a member of the delegation.

I will post on the visit but yesterday David wrote a powerful (and angry) article in the NewStatesman which I have copied below:-

"Unless Europe’s leaders summon the political will to act on behalf of the voiceless and vulnerable this untold suffering will only get worse, and I fear that Greece, perpetually teetering on the brink of oblivion, may well collapse as well.

Last week, while European leaders met in Brussels to discuss their response to the worst refugee crisis Europe has seen since World War Two, I visited a dilapidated shipping warehouse in Piraeus, the port area of Athens that has become home to thousands of stranded refugees.

What I saw was absolutely harrowing. Hundreds of refugees are living in inhumane conditions in a dark, damp and filthy old shipping warehouse, lacking supplies or even basic levels of sanitation.

I spoke to a group of Afghan teenagers who told me that a young child had tragically passed away in the camp over the weekend preceding my visit, and there will be more deaths to follow if Europe does not act urgently to address the situation.

It has become clear that this situation can only be tackled if European nations reopen their borders and work to reach a collective, and lasting, political agreement.

35,000 refugees are currently stranded in the Greece, and according to the UN up to 2,000 more are arriving daily. Macedonia closing its border has blocked the Balkan route out of the country, leaving 13,000 migrants stranded in camps on the border, and the situation will become increasingly dire day by day with Croatia and Slovenia following suit.

Greece finds itself in the depths of a double crisis. In addition to being on the front line of Europe’s refugee emergency, it is hard to imagine an economy in a worse state. Official figures show that unemployment is around 25 per cent, but the Mayor of Piraeus told me that in areas of Athens the true figure is at least 50 per cent.

Public spending has also been cut to the bone and last year’s third memorandum imposed further spending cuts worth seven per cent of Greece’s GDP, which itself has been in freefall since 2010. Over half of young Greeks are unemployed, leaving entire families reliant on pensions and charity. The head of the Greek local government union told me that public sector pensions have been cut in half, before taking into account further cuts of almost €2 billion announced in the most recent budget.

It is a source of shame to European nations that Greece’s government is being hung out to dry in this way, handed the impossible task of rescuing an economy that is on the verge of collapse together with managing a humanitarian crisis that is without parallel in Europe this century. Meeting with Syriza ministers made clear that the Greek authorities are completely overwhelmed, like King Canute trying to hold back an unstoppable tide.

The scale of this disaster overwhelmed me in its all of its inhumanity, cruelty and brutality. Turning our back on the great crisis of our time won’t make the problem go away.

A “one in one out” deal with Turkey simply does not come close to providing the answer. A quick fix deal is likely to break down in the future and, as the UN Refugee Agency has warned, the deal is unlikely to stem the flow of refugees trying to reach Europe. A collective political agreement is not only the right thing to do in a moral sense, it is the only real available option that matches the scale and severity of this catastrophe.

Unless Europe’s leaders summon the political will to act on behalf of the voiceless and vulnerable this untold suffering will only get worse, and I fear that Greece, perpetually teetering on the brink of oblivion, may well collapse as well".
Posted by John Gray at Tuesday, March 15, 2016