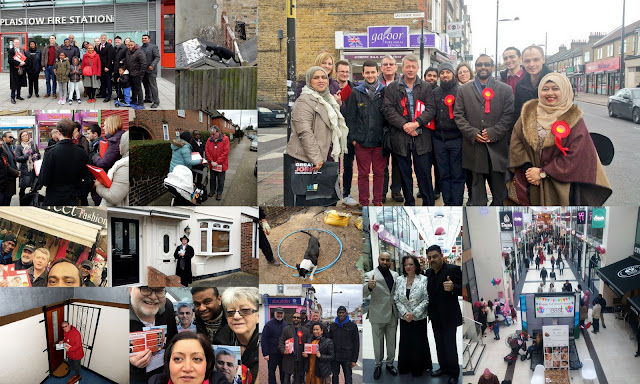 It has been a busy weekend for West Ham Labour. Yesterday I was out with a Labour canvass team for Sadiq Khan as mayor in Green Street. See Vice Chair Campaigns, Julianne Marriott, briefing the team beforehand on what to do. Highlight of the morning was calling at a Roman Catholic nunnery.

Then we met our MP Lyn Brown, at the East Shopping centre which was celebrating its first birthday. Some members also attended the anti racism rally in Trafalgar Square.

In the afternoon we were in Plaistow South ward with City & East GLA candidate Unmesh Desai.  As you can see from the photo outside the fire station, we had a number of (very) young socialists with us. I was with the team led by Stratford Cllr, Charlene McLean, who used her daughters pram to hold spare leaflets and sheets. Picked up some repair and school issues which were dealt with by local Cllr Neil Wilson. Picture of excited staffie, stalking cat and CLP secretary, Alan Griffiths.

In the evening there was a meeting of City and East Momentum followed by a social in Forest Gate. This morning there was another canvass team out in Custom House led by local Councillors Rokhsana Fiaz and Pat Holland. This evening there is Sunday Night Live at the Stratford Picture House on "Does Feminism Need a Upgrade" (5pm-6.30)

Click on picture to bring up detail.
Posted by John Gray at Sunday, March 20, 2016