A Manifesto for all Londoners - Sadiq Khan our Future London Mayor 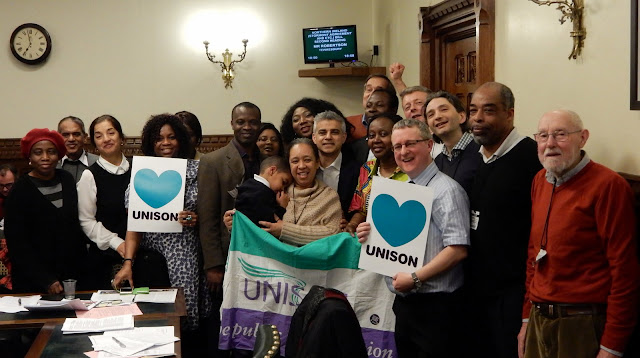 On Wednesday Sadiq launched his manifesto for all Londoners

"London is the greatest city in the world. But we are at a crossroads.

Our city gave me the opportunity to go from the council estate where I grew up helping to run a business, serving as Transport Minister and now running for Mayor. I had the benefit of a good state school, a place at university that I could afford, and ultimately, good jobs for my wife and me that enabled us to buy a family home.

But today, Londoners are being priced out of our city. The next generation is missing out on the opportunities that our city gave me when I was growing up.

For a child on a council estate today, London is not the city of opportunity that it was for my brothers, my sister and me.

For young families and individuals on average incomes, housing is increasingly unaffordable – with home ownership a distant dream. Social mobility is failing. In-work poverty is rising. Rocketing transport fares are making it more expensive to get to work or training.

London’s status as one of the world’s leading commercial and cultural capitals, and the prosperity that it brings, is not assured.

We are in competition, not just with New York, Paris, LA and Tokyo, but with rising powerhouse city economies such as Beijing, Shanghai, Sao Paulo, Mumbai, Mexico City and Moscow.

We cannot afford to price ordinary, working Londoners out of our city. If we shut down opportunity, London will become closed to the young, to the entrepreneurs, and to the hard-working people who make our economy and communities tick.

My mission is to restore opportunity, and in doing so to protect and advance London’s competitiveness and its status as a world-leading city for business, creativity, and fairness.
My first priority will be tackling the housing crisis. We need to build more homes, including more genuinely affordable homes for Londoners, and fewer gold bricks for overseas investors.

And I’ll be the most pro-business Mayor yet. Not just because I’ve helped to run a business, and understand the challenges that those trying to grow an enterprise face, but because I know that a prosperous, growing economy is central to ensuring that our city

remains a place of opportunity. I’ll work with businesses to ensure that more Londoners have access to the skills they and our economy need, and I’ll stand alongside business leaders in campaigning for Britain to stay in the EU.

I’ll also be the greenest Mayor ever, seeking to establish London as a leader in low-carbon innovation and industry, cleaning up our dangerously polluted air, and setting out an ambitious long term plan for clean energy in our capital.

I’ll make sure that our transport services meet the needs of a modern economy, while remaining affordable.


And I will make London safer and more secure, with a renewed focus on neighbourhood policing, action to tackle the spread of extremism, and fighting for the resources our police and fire services need. In doing so, I will keep the GLA council tax precept down as far as possible.

With money so tight for so many Londoners, I supported the decision to cut council tax following the end of the Olympic precept. My promise is to keep council tax as low as possible without risking Londoners’ safety.

I’ve got the experience, values and vision to put London back on the right track.

I’ll be a Mayor for all Londoners".

(picture of Sadiq and members of the UNISON Housing Association Branch at the House of Commons last month)
Posted by John Gray at Friday, March 11, 2016