LOBOs are a National Scandal 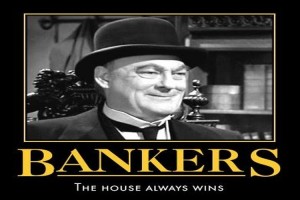 Last week there was extensive coverage in the Standard and Independent on the UK LOBOs scandal. I have posted before on LOBOs (see labels)

Yesterday the Independent published a new report that John Mann MP and Chair of select committee, Clive Betts MP, had called for a Financial Conduct Authority and Parliamentary investigation into the scandal.

This is not just about Newham's exposure to LOBOs but a real national crisis. Councils all over the country, regardless of political control, have been completely ripped off by the banks. At the time of unprecedented austerity cuts to services, 250 Councils have £11 billion in toxic loans. It is not only Councils but Housing Associations have huge exposure as well.

It is clear that these loans have been mis-sold but there are allegations of wide spread "kick backs" by banks to Council advisors. At the same time the banks were selling these loans some of their own traders were criminally conspiring to manipulate the Libor rate (which most of the LOBOs are linked).

The FT waded in on Friday also with a measured article by Jim Pickard, its Chief Political Correspondent (see below).

This is also an urgent problem due to legal time limits since as pointed out by in the Independent  “If councils are not looking at this they should be,” said Janine Alexander, a partner at the law firm Collyer Bristow. “If they don’t act quickly, they may run out of time.” .

Doing nothing is not an option. I hope that the Government, the regulators, all Councils impacted and the LGA will get their act together and do something urgently.


In 2009, Newham Council took what it thought was a canny financial bet: that interest rates would rise. The east London borough, the second most deprived local authority in England at the time, was an unlikely participant in the complicated world of structured finance.

The council took out six loans worth £150m on which the rate of interest would fall if long-term interest rates rose: and vice versa. But interest rates did not go up: they fell to a historic low. And now the council is facing mounting questions about its gamble.

Newham is not alone. Across Britain, councils have taken on hundreds of opaque loans. England’s local authorities have about £70bn of debt, according to the Chartered Institute of Public Finance and Accountancy.

Of that, so-called Lobo loans (Lender Option Borrower Option) make up in excess of £11bn. They were all taken out before 2012. Freedom of Information requests by Debt Resistance, a campaign group, have discovered 805 such loans to 250 councils.

The loans usually have a lifespan of about 50 years. Many are regular fixed rate loans but some are exotic products with embedded derivatives.

Even on the “vanilla” Lobos, a lender has the option at certain dates — typically every five years — to impose a higher fixed rate. At that point the borrower must either accept this or repay the loan.

Newham is in the spotlight because it is the biggest borrower of Lobo loans in Britain. During the 2000s it took out 27 such products at a face value of £563m instead of turning to the usual source of municipal lending: the state.

Newham’s debts are a sensitive issue because it is seeking savings of £50m in 2016-17 after government cutbacks. It took out the loans between 2002 and 2009 to refinance £179m of old state loans and then raise £385m for capital investment including the Olympic stadium.

It says the borrowing — from lenders including RBS and Barclays — led to a “dramatic reduction” in interest payments compared to its old fixed-rate loans from the Public Works Loan Board (PWLB), a wing of government.

But critics question whether Newham is still getting a good deal. Some loans appeared cheap at first but are now generating interest rates of up to 7.6 per cent.

Joel Benjamin from Debt Resistance said Newham should have borrowed from the PWLB instead. “There was no need to enter into speculative derivative contracts . . . for what ultimately constitutes a gamble with local taxpayers’ money,” he said.

Newham’s 27 loans represent a mixed bag including some ordinary fixed-rate loans. There are nine “range Lobos” under which the council must pay a higher rate if Libor falls above or below a certain range — which has happened.

Most contentious are its six “inverse floating Lobos” from RBS under which the interest rate payable rises as the 10-year interest rate falls. If the rate had risen, this would have provided a hedge: instead it fell. The six loans have a face value of £150m but their “fair value” has leapt from £176m in March 2014 to £271m in March 2015.

The council says that it took out the loans in 2009 when yields were expected to rise, not fall. “This situation was not predicted by the best pundits,” it says. It admitted the inverse floater Lobos were “expensive” but said their rate should fall amid expectations of an interest rate rise.

Other councils which took out “inverse floaters” from RBS include Cornwall, Edinburgh, Brent, Lancashire and North Lanarkshire.

Overall, Newham claims to have saved money through its Lobos, calling them “prudent, affordable and sustainable”. It says its rump of £65m of PWLB loans have a slightly higher average interest than its Lobo loans.

But campaigners say this is an “apples vs pears” comparison because the legacy PWLB loans were taken out when interest rates were much higher.

There was no need to enter into speculative derivative contracts . . . for what ultimately constitutes a gamble with local taxpayers’ money

A committee of MPs last year held an inquiry into Lobo loans amid criticism of their opaque nature and high exit penalties. There are also concerns about the potential conflict of interest when firms which advised councils received commission from City brokers.

Robert Carver, a former derivatives trader at Barclays Capital, told the committee Lobo loans were “horrible stuff”. “I do not think anyone who fully understood it would do it,” he said.

Barclays said it rejected any suggestion that it had not acted in councils’ best interests. It said no council had ever complained about the “straightforward, fair” loans. A source at the bank said it had made losses on its council Lobo loan book. “This is a conspiracy without a victim,” he said.

Meanwhile, three Labour Newham councillors have criticised the authority for initially refusing to hand over copies of the original loan contracts. “If we are spending more on interest rates than we should be . . . this is an extremely important matter of concern to our constituents,” they said.

Treasury management firms, which advised the sector, typically advised councils to hold less than 30 per cent of their debt in variable rate Lobos. Newham’s Lobos — by contrast — make up 90 per cent of its debt.

That figure spiked in 2012 when £544m of Newham’s PWLB debt was wiped out as a result of the government’s abolition of the housing revenue account system.

The Local Government Association admitted Lobos were “riskier instruments” in the long term. But it said low interest rates meant no lender had yet exercised their “lender option” to increase rates.

“Some local authorities may have been able to get better deals by delaying their borrowing if they had anticipated the credit crunch . . . they can hardly be criticised for not doing so,” it said.